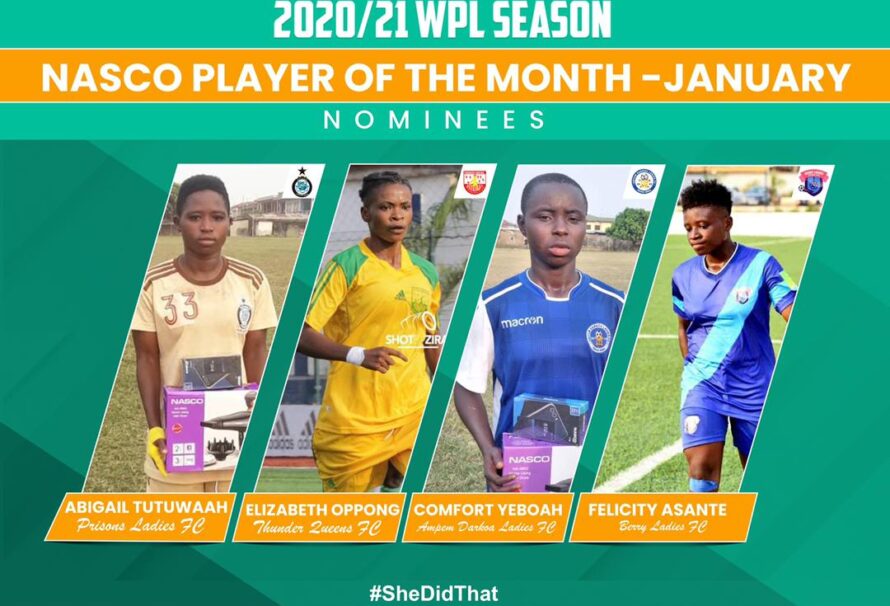 Elizabeth Oppong, Felicity Asante, Abigail Tutuwaah and Comfort Yeboah received nominations for the NASCO Player of the month award for the month of January.

Elizabeth Oppong has held together the midfield of Thunder Queens FC perfectly in the Month of January with her impressive defensive prowess having completed 270 minutes of action with a goal and two assists. She was also named as NASCO Player of the Month twice in January.

Berry Ladies forward Felicity Asante who is currently leading the top scorers chart with her four goals (including a hat-trick) has also seen her earn a place in the list of nominees for the month of January. She featured in all three matches and also made two assists in the Month of January.

Next on the list of nominees is Abigail Tutuwaah who has been a top performer and a delight to watch for Prisons Ladies in the Northern Zone of the Women’s Premier League.

The midfielder has featured in all three matches for her side and has proven to be the heart-beat of the team with classic performances.   She scored a goal and also received one NASCO Player of the month award to her credit.

Comfort Yeboah completes the nominee list for Player of the month in January with her unblemished record in defense for Ampem Darkoa Ladies FC. The 14-year old defender was key at the heart of defence for the Techiman based side and lasted the entire duration in all matches played in January. She has won the NASCO Player of the Month twice with her great performance.

The winner of the player of the month will be awarded with a 32inch NASCO TV set, a hand dryer and a trophy.

The winner of the award will be announced on Tuesday February 11 on the GFA’s website.

You can also visit the twitter account of the Ghana Women’s Premier League, @wplgh_official and express support for your favorite player.