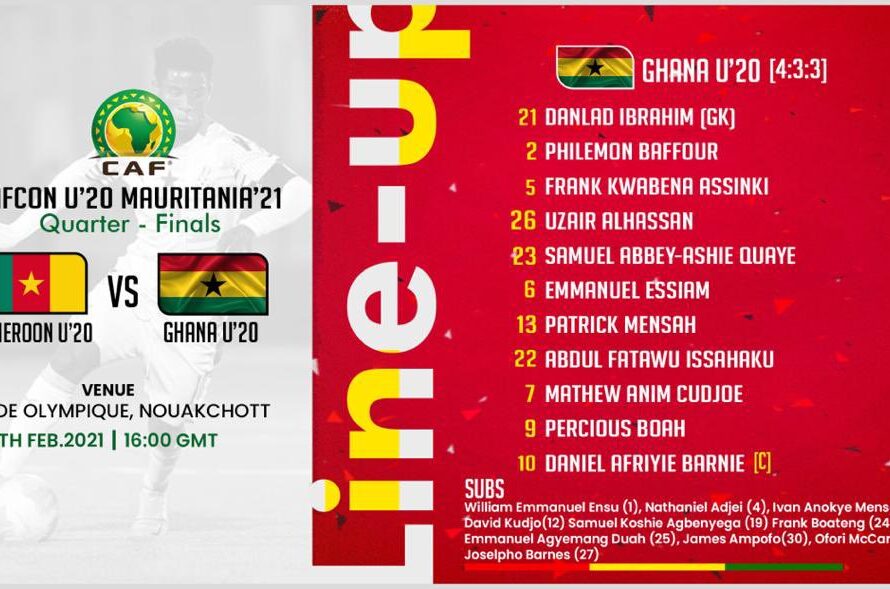 Black Satellites trainer Abdul Karim Zito has been forced to effect four changes to his starting line up to face Cameroon in the first quarter-final of the ongoing U-20 Africa Cup of Nations in Mauritania.

Four key players who had been starters for the side have all been forced to the bench due to injuries.

Sulemana Mohammed and Joselpho Barnes will not be available to make the Ghana forward juicy while the defence has also been delpetes by the absence of Nathaniel Adjei and Ofori McCarthy.

Skipper of the side and Hearts of Oak winger Daniel Afriyie has been handed his first start in the tournament as well as Mathew Cudjoe.

Afriyie and Cudjoe are starting ahead of Joselpho Barnes and Sulemana Mohammed respectively.

The team’s center-back pair of Nathaniel Adie and Frank Assinki will see an alteration for the first time following an injury suffered by Nathaniel.

Assinki will, therefore, be partnered at the heart of defence by Uzair Alhassan.

Patrick Mensah has been handed a return into the team as Ofori McCarthy bows out.

The four have been second-half substitutes for the Black Satellites during the group games.

Ghana lost 2-1 against Gambia in the final group game to set up this clash with Cameroon who were Group A winners.

Cameroon hold a 100% winning record in this tournament, winning all the group games to progress to the knockout stage.

The first quarter-final game comes off at the Stade Olympique de Nouakchott.

Below is the starting line up for the Black Satellites: