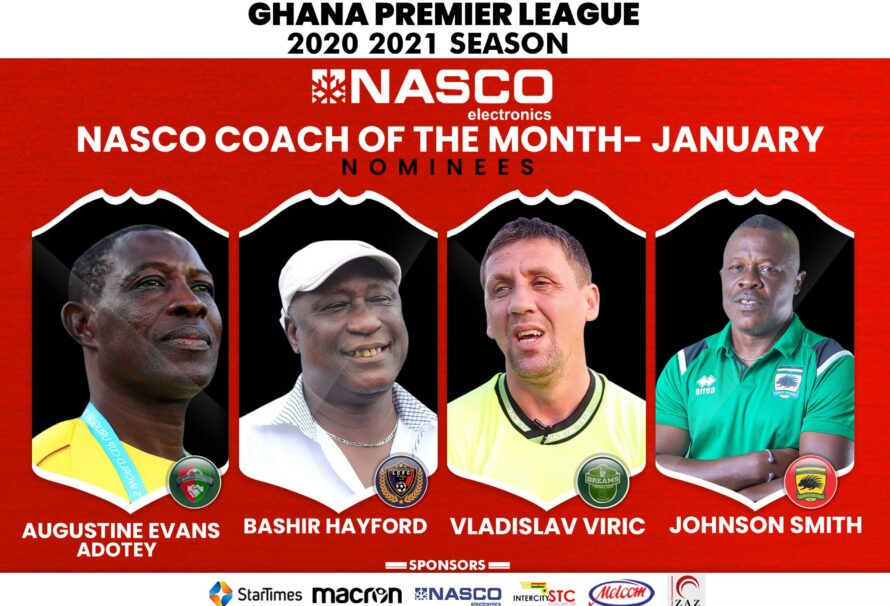 Four Coaches who led their teams to impressive results in January have been nominated for the NASCO Coach of the Month Award.

The winner of the 2020/21 GPL NASCO Coach of the Month for January award will be announced on Wednesday February 10, 2021.

The winner will receive a NASCO Television set and a personalized trophy.

Below are the nominees for the Coach of the Month- January:

After taking over as head coach of the side Coach Bashiru Hayford saw his team secure three wins out of five games played in January.  Two of their wins were secured at home and a vital win away when they beat Inter Allies at the Accra Sports Stadium. Legon Cities however lost two matches within the month. In all the team secured 9 points in January.

As Head Coach of the league leaders, Coach Adotey lead Karela FC to three wins in January. All three wins were secured at the Anyinase CAM park. The  team also drew away to Great Olympics at the Accra Sports Stadium giving them a total of 10 points in January.

Out of the five games played in January, Coach Johnson Smith’s side guided his side  to two wins and 2 draws in January. The Club secured a win at home and one away in the month. They however suffered a defeat to Great Olympics at the Accra Sports Stadium.

After taking over as head coach, Viric’s men were unbeaten throughout January. Two wins and three draws has seen the resurgence of the side after a torrid start to the season. In all Dreams FC secured 9 points out of 15 in January.