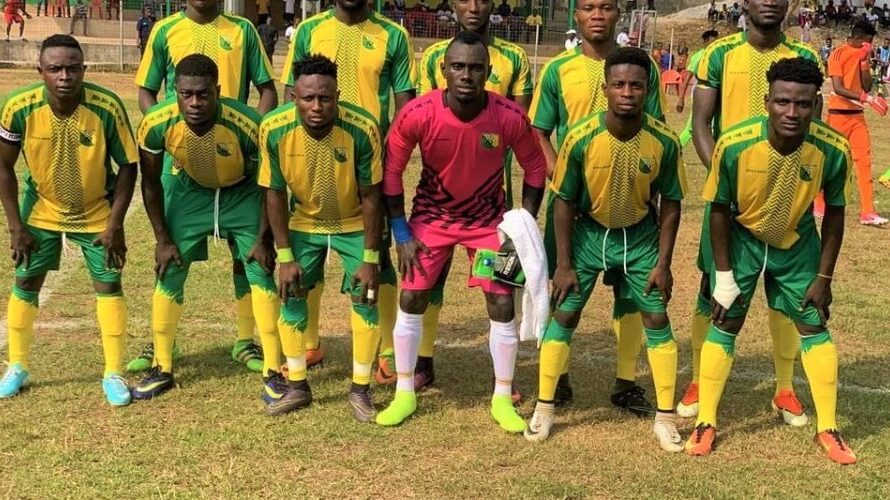 Zone 2 leaders Bibiani Goldstars maintained their unbeaten run in the Division One League with a solitary win over Unistar Academy thanks to a wonderful strike by in-form Prince Owusu.

The win is the second successive home win for Coach Amissah’s side, maintainining their stay on top of the table with a 100% win record.

In-form striker Prince Owusu took his tally to 5 goals in 4 games consolidating the hopes of his side’s Premier League aspirations.

Pacific Heroes out of the blue earned a second win in a row with a 2 – 0 victory over Star Madrid. The victory pushes them to 6 points on the log.

Skyy FC managed to share spoils with Mallam Yahaya’s Wassaman United in Ejisu after taking the lead. Baba Musah shot the visitors in front before Iddrissu Mohammed restored parity for the home side.

Asokwa Deportivo denied FC Samartex their first win of the season after a 1 – 1 game in Samreboi. Samartex took an early lead and were cruising to a win when Gordon Kusi fired the equalizer for the visitors on the 89th minute.

Bekwai Youth Football Academy staged a return to winning ways with a slim win over Proud United. Majid Nuhu fetched the only goal of the game to hand his team a second victory of the season.

Swedru All Blacks swept aside Achiken FC by two unanswered goals to move 4 points on the log, a point above Achiken FC.

Below is the full results of MD4;