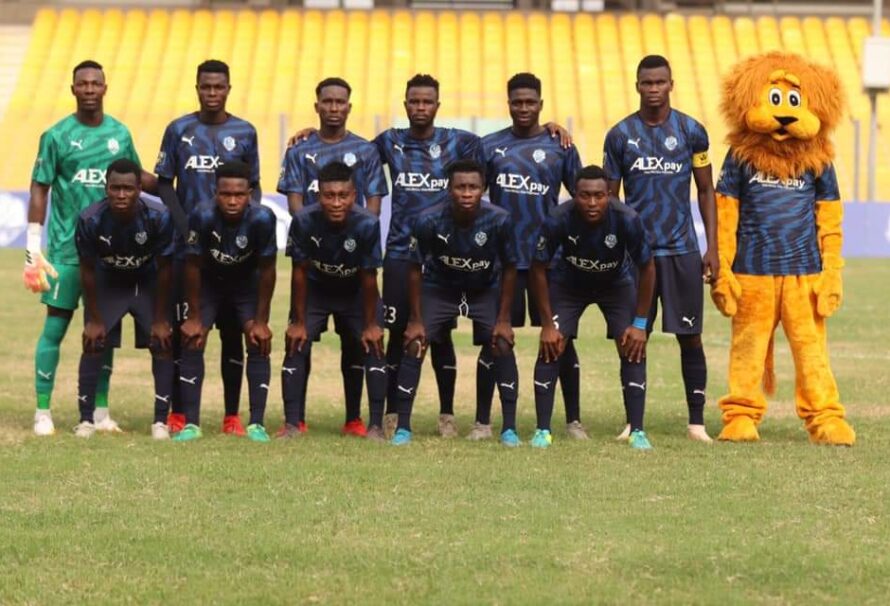 Accra Lions maintained their unbeaten start to the Division One League in Zone 3 with a fabulous 2-1 win over Phar Rangers to reclaim their spot on top of the table on Monday afternoon.

Phar Rangers, hence tasted their first defeat of the season after going two games unbeaten at the start of the season with Heart of Lions managing a 5-0 thumping of Accra Young Wise to keep their qualification hopes alive.

On Saturday, Accra City held Danbort FC to a 1-1 drawn game at the Zimmermann Presby Park in Nungua.

The match day 3 fixture saw the home team Danbort taking the lead on the 15th minute through a strike from Jeffery Kumi but Sylvanus Attach restored parity for the visitors after the break.

Mohammed Akadom of Danbort FC was adjudged the MVP of the match.

The high tempo game exhibited by both teams was the only attraction the fans took away. Neither side was able to get a goal in the match. Vision Fc were however reduced to 10 men on the 56th minute when Abdul Suleiman was shown a red card after a late tackle on an opponent. The result meant Vision FC are winless this season, losing 1 and drawing 2 games this season. Nania FC on the other have won 1, drawn 1 and lost 1 game of the season. The MVP of the game went to Abdallah Yahaya.

On Sunday, Kpando Heart of Lions made it 100% start to their season with a 5-0 thrashing of Accra Young Wise at the Kpando Sports Stadium. The day saw a 23rd Minute opening goal by Charles Offei Quarcoo to register the Lion’s intention.

The second half resumed with both teams looking very sharp on attack until the eventuality struck. Samuel Agbenyegah recorded 2 goals under 3 minutes of the game. He got his first on the 70th minute and second on the 73rd to give Lions a 3-0 lead into the game.

When all thought that was the end of the display, substitute Foster Amoah, also grabbed a brace to send the fans in to wild jubilation. He got his first goal on the 84th minute and the second on the 88th minutes. Samuel Agbenyegah was however named the MVP of the game.

The visitors after losing at home to Heart of Lions had hopes of at least leaving the Akotex Park with a point. Adamu Amadu scored the opening goal for the host on the 29th minute and recorded his second moments before half time on the 45th.

The second half resumed with Esmond Nanor and Desmond Awuah completing the rout on the 75th and 90th minutes respectively. Afriyie Sandy Annor of Krystal Palace was named the MVP of the match.

Far away in Oda, Kotoku Royals deepened the woes of struggling Agbozume Weavers FC. The away side has been the whipping boys of the Zone so far recording 7 goal deficits in the process.

They again lost 2-0 to Home team Kotoku Royals. Richard Dziekoe scored the games first goal on the 28th minute and was named the MVP of the match whiles Clement Boateng had the other goal on the 25th minute for the host.

The win is the first for the team at home after enjoying a walk over against Amidaus Professionals on Match Day one.

On Monday afternoon, Tudu Mighty Jet lost their home game to Tema Youth. The harbor boys opened the scoring on the 60th minute when Emmanuel Owusu hitting home the opener. The host before conceding the opening goal missed a penalty on the 50th minute through Sumaila Bawah. The visitors rounded up the scoring with a superb goal on the 89th minute kind courtesy Evans Osei Owusu. The win catapult Tema Youth up the standing putting pressure on the leaders.

Meanwhile the Accra Sports Stadium hosted a top of the table clash between Accra Lions and Phar Rangers and it lived to the pre match hype.

Accra Lions beat their opponent to maintain their unbeaten run of the season and ending the same for visitors Phar Rangers.

Etti Evans scored the game’s first goal on the 31st minute after some sloppy defending by the visitors.

Phar rangers through their topman Samuel Attah Kumi terrorize the last tier of the host but saw most of his efforts into the waiting hands of the goalkeeper Appiah Kubi.

The game returned from recess with the solitary goal until Kelvin Kyei doubled the lead for the home team to throw the stadium in to wild fanfare. The goal eased pressure on Accra Lions who then decided to dictate play against a well determined side.

Phar Rangers had their efforts paying off when a penalty was awarded them in the 90+3 minutes. It was scored by Abdul Aziz Dogo to reduce the deficit by a goal.

The game ended 2-1 in favor of Accra Lions as their player Alex Agyarkwa was adjudge MVP of the game.