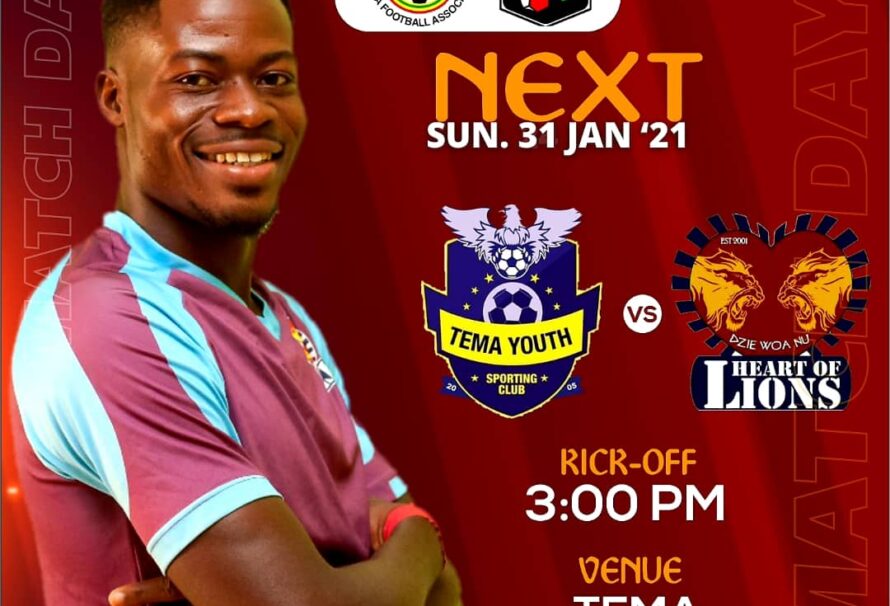 The Tema Stadium on Sunday will see a clash of the titans when Tema Youth welcome Kpando Heart of Lions in week 4 of the ongoing Division One league in Zone 3.

Lions are unbeaten this season whiles Tema Youth have rediscovered their fortunes after a shady start to the season.

The last meeting between the two teams saw a 2-0 victory for Lions in the truncated league season in Kpando.

Both teams are coming from a win in their previous game with Lions thumping Accra Young Wise 5-0 whiles Tema Youth picked an away 2-0 win over Tudu Mighty Jets.

Lions are joint leaders on the standings with 9 points whiles Tema Youth occupies the 4th spot with 7 points. Lions Goal keeper Gabriel Nudakpa has conceded only 1 goal this campaign.

In other games, Phar Rangers will return home with just one mission; a return to winning ways. The home team will take on Kotoku Royals at Akuapem Mampong.

Kotoku Royals are enjoying a fine run this season and are 3rd on the league standings with 7 points. Meanwhile the unbeaten run of the home team was halted last Monday by Accra Lions.

With all the firepower Phar Rangers harbours in Abdul Aziz Dogo, massive score line is expected in that game. The home team is 5th on the league standing.

Elsewhere at the Dansoman Park, Planners FC will seek to reassure themselves of a good season as they play host to struggling Tudu Mighty Jets.

The host have drawn 2 games and won 1 this season having attained 5 points. This wasn’t what they signed up for and are in anticipation to use this game to turn results around.

Similarly, Mighty Jets are also having a bad season, they’ve lost 2 games and drawn 1 with just a point. The game is scheduled for Sunday and will be a defining moment for both teams.

Meanwhile, Vision FC with their leading goal scorer Karim Mohammed will have to comb deeper into the crystal ball and attain a result that befits their status.

The team welcomes joint leaders Accra Lions to a battle of the known nemesis.

Vision FC are winless this season and are 12th with 2 points on the league table whiles Accra Lions are having a good season, winning all matches and are joint leaders on the standing with 9 points.

Evans Etti remains the danger man for the visitors as he leads the goal king chart in the zone with 4 goals.

Back from the humiliation in Kpando, Accra Young Wise will welcome Krystal Palace to their home grounds. The Accra-based team aren’t in a good shape, with juts a win in three games and on the 10th spot on the league standing.

Krystal Palace on the other hand handed Uncle T United their heaviest defeat of the campaign. A 2-2 drawn game at Vision FC and 4-0 win in Akosombo over Uncle T is just the signal how good the visitors are becoming. This game is a battle of equal strength.

Uncle T United will lock horns with Nania FC at the Ghanaman Soccer Center of Excellence. The home team suffered a humiliating away defeat in match day 3 to Krystal Palace. They have all to play for in the bid to stimulate their season fortunes.

On Friday, Agbozume Weavers will welcome Danbort FC to the WAFA Red Bull Arena in Sogakope. The home team has been the whipping boys of the zone and must take that tag away with a good victory over the visitors.

After suffering a goal deficit of 9 in 3 games, Danbort are assured of getting at least a goal against the Weavers despite playing away.

Accra City Stars will be enjoying a walkover in their clash with Amidaus Professionals as the visitors failed to register players for the season.