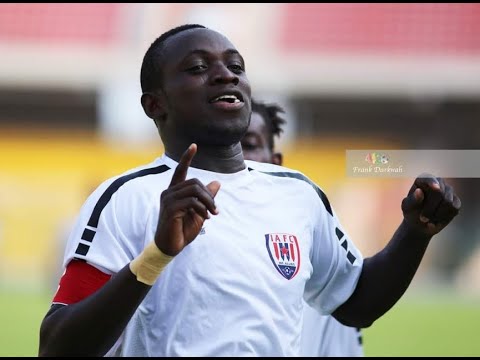 Adebayor who has been a long target of Hearts of Oak is set to return to the Ghana Premier League for the second time but not to sign for the Phobians.

Hearts upon nosing that the player wants a return to Ghana following claims that he’s not happy with his Danish side swiftly made moves to secure the signature of the Nigerien.

But billionaire club Legon Cities FC have outsmarted the Phobians for the signature of the former Niger skipper.

Inter Allies released the Nigerien star to Danish 1st Division side HB Koge on a three-year in October last year.

But reports are that Adebayor is unhappy with his Danish suitors, hence his decision to return to the Ghana Premier League.

Before the total shutdown of Ghana football last year due to the outbreak of the COVID-19 Pandemic, Adebayor was the major talking point in the Ghana Premier League after scoring 12 goals in 16 appearances.

He was a key member of the Niger National Team B that participated in the 2017 WAFU Championship in Ghana, making him the point of attraction for many clubs including Hearts of Oak, Asante Kotoko and Aduana Stars, but Inter Allies won the race for his signature.

For the second time running, the Phobians have been beaten to his signature by city rivals Legon Cities FC who have been big spenders in the league.

They broke the bank to secure the signature of former Sunderland and Udinese striker Asamoah Gyan and have now concluded the signing of Adebayor.

The Nigerien star is set to arrive in Ghana in the coming days to join The Royals and they heighten preparations for the second round of the league.

With Adebayor’s capture is set to sustain the club’s current good show in the league as they gallop out of the relegation zone.