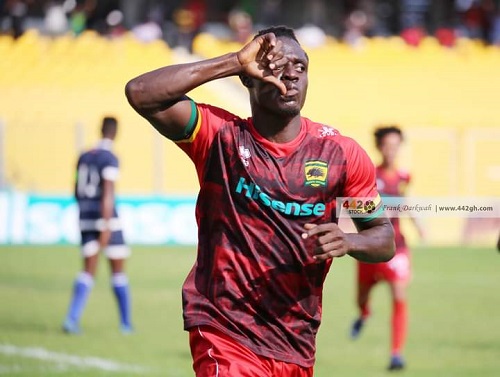 Kwame Poku’s goal-scoring feet is attracting suitors from all over the Arab world with Libyan giants Ittihad Triploi being the latest to have joined the chase for the striker.

Reliable sources in Libya have disclosed to footballmadeinghana.com that the giants have officially written to Asante Kotoko to inquire about the availability of the player.

Footballmadeinghana.com understands that the former Libya Premier League winners have proposed a loan deal of 6 month for the Ghanaian striker with an option to make the deal permanent if Poku impresses.

The Tripoli side will be the latest from the Maghrebian world to have officially tabled bids for the former Nkoranza Warriors striker.

Egyptian giants Zamalek were the first to have requested for the boy but negotiations were not conclusive before the closure of the Egyptian transfer window.

The deal to Zamalek hit a snag with Algerian side USM Alger offering a lucrative deal for the wonderful finisher.

With USM Alger tabling a mouthwatering offer for the striker. Ittihad Tripoli are likely to have their offer turned down.

Opoku has been outstanding for the Porcupine Warriors in the Ghana Premier League this season having scored 7 goals in 14 games.

He also scored when Asante Kotoko played Algerian side ES Sétif in the CAF Confederation Cup play-off round.

The Kumasi based club has already received an official request from Ittihad Tripoli and may be responding in the coming days.

Opoku is part of the Ghana squad training ahead of this month’s 2021 Africa Cup of Nations qualifications.