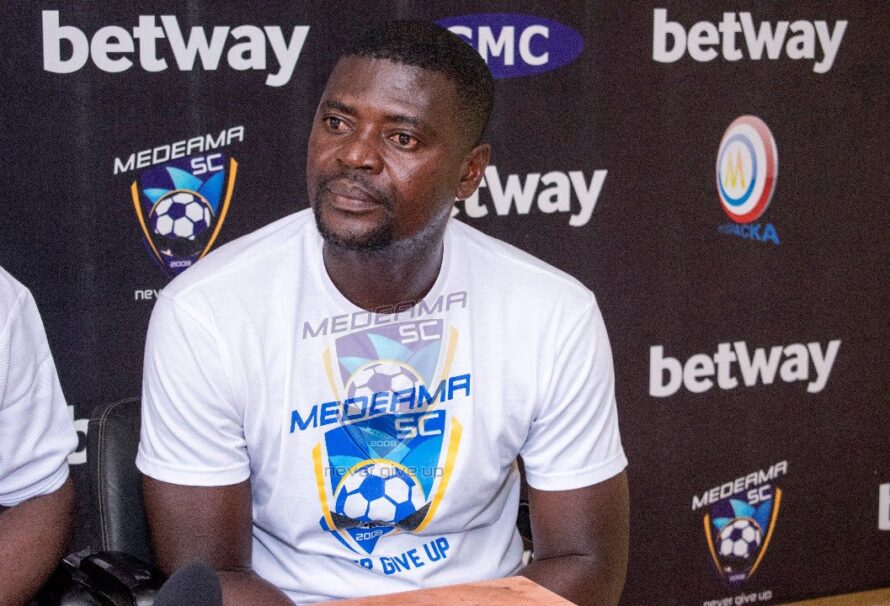 The coaching woes of Hearts of Oak will face a permanent end in the coming days following fruitful discussions between the club and Medeama SC gaffer Samuel Boadu, footballmadeinghana.com can exclusively reveal.

The young and brilliant gaffer has been a long admirer of the leadership of the Phobians and is finally joining the club after several attempts to lure him earlier proved futile.

Footballmadeinghana.com can exclusively disclose that Boadu is inches away from being the successor of Kosta Papic who left the club a few days ago citing interference in player selection as one of his reasons.

Boadu, before the appointment of Kosta Papic was the choice of the Phobians but insiders claim Medeama SC were not ready to let go of the young gaffer.

The relationship between Medeama SC and Boadu is believed to have been sour from the start of the season precipitating attempts of the young coach to leave.

Hearts of Oak are believed to have made a formal request for Boadu from Medeama SC last season by the Tarkwa-based club declined the request insisting the young man was a project for the club.

READ ALSO:  'My friends made me a goalkeeper' – Ghana shot stopper reveals

But with the recent sour relationship between the coach and Medeama SC, the club is ready to let go of the manager who is on his way to Hearts of Oak.

He will take over from Samuel Nii Noi who is currently the stop-gap coach of the side following the departure of Kosta Papic.

Samuel Boadu will be the 16th Hearts of Oak manager since 2012 and the 4th this season after Nii Odoom, Kosta Papic and Nii Noi.

He will be confronted with transforming the club and winning back the love of the fans who have gone berserk following the departure of Kosta Papic.

Not only that, he will also be tasked with setting up his own technical team since the deputy coach of Hearts Asare Bediako and the goalkeepers’ trainer Ben Owu have all resigned.

He is likely to commence work before the start of the second round of the season which sparks in the middle of next month.

Hearts fans who have admired the young gaffer will be in high spirits ahead of his arrival as he’s seen as one of the beat managers on the local scene.

Boadu is credited with the recent transformation of Medeama SC and has unique admiration of young talents.

He’s the head coach of the Ghana U15 side that was started about two years ago and is credited with laying the foundation of the recent U17 side, the Black Starlets.

Despite being synonymous with the sacking of managers, Boadu is expected to demystify that myth and stay long with the Phobians.