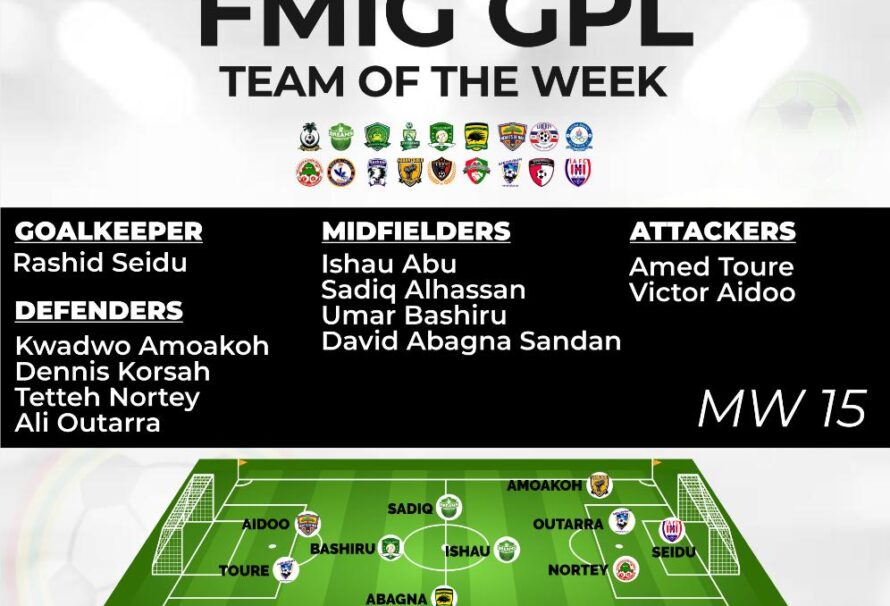 The team at FMIG has put together a team of best performers in the Ghana Premier League during Match Week 15.

From the goalkeeper to the last outfield player, we have taken time to give the various reasons that qualifies the players to make our Team of the Week.

1- Rashid Seidu ( Inter Allies) – Seidu was the reason why Allies kept a clean sheets against WAFA. The goalkeeper was in too of his game and answered all the questions asked him by the academy lads.

2- Kwadwo Amoako ( Ashantigold) – Fantastic display by the right back. Made things difficult for the Aduana Stars backline with his surging runs and crosses from the right side.

3- Dennis Korsah ( Ebusua Dwarfs)- Great display by the Ebusua Dwarfs skipper. The left back was solid on the day and made things difficult for Patrick on the right side. Scored calmly from the spot to equalized for his side before they conceded a late goal through Isaac Mensah.

4-Tetteh Nortey ( Eleven Wonders)- Scored the only goal of the game which brought an end to wonders winless run. Nortey has been solid at the back for the Techiman based side since joining them at the beginning of the season.

READ ALSO:  “The FA did not give me the respect I deserved”- Coach Bashir Hayford on GFA Technical Director snub

Ishau Abu (Berekum Chelsea) – One of the revelation of the season. The defensive midfielder after a shaky start to his premier league career has since settled very well for Bibires. Ushau once again produced a great performance which saw his side ended Dreams FC unbeaten run.

Sadiq Alhassan( Karela United) – Was named the MVP following another fantastic performance which saw his side overcome Liberty Professional at home. Alhassan’s provided the need sheild for the back four and made show they end the game with a clean sheet.

Umar Bashiru ( Karela United) – two goals in two goals after going 12 games with scoring any. Umar Bashir has been one of the revelation of the season for Karela United after
A disappointing spell with Asante Kotoko. His ability to dominate the midfield and dictate the pace of the game makes him one of the best in the league. His combination with Sadiq Alhassan gave Liberty Professional no breathing space in the game.

David Abagna Sanda ( Ashantigold) – Continue his good run of form for the Miners by scoring two goals against Aduana Stars. The central midfielder won the midfield battle against the Fire boys before scoring twice to help his side to return to winning ways.

Amed Toure (Medeama) – What a debut to remember for the Burkinane international. Took him only three minutes to announce his return in the league with a sexy finish to give his side the lead. Capped up his performance with a beautiful free kick to give his side the maximum points.

Victor Aidoo( Hearts of Oak) – Broke his five games goalscoring drought by scoring two from the spot for Hearts of Oak. Was very much involved in all the attack of the Phobians as they edged Ebusua Dwarfs at home.