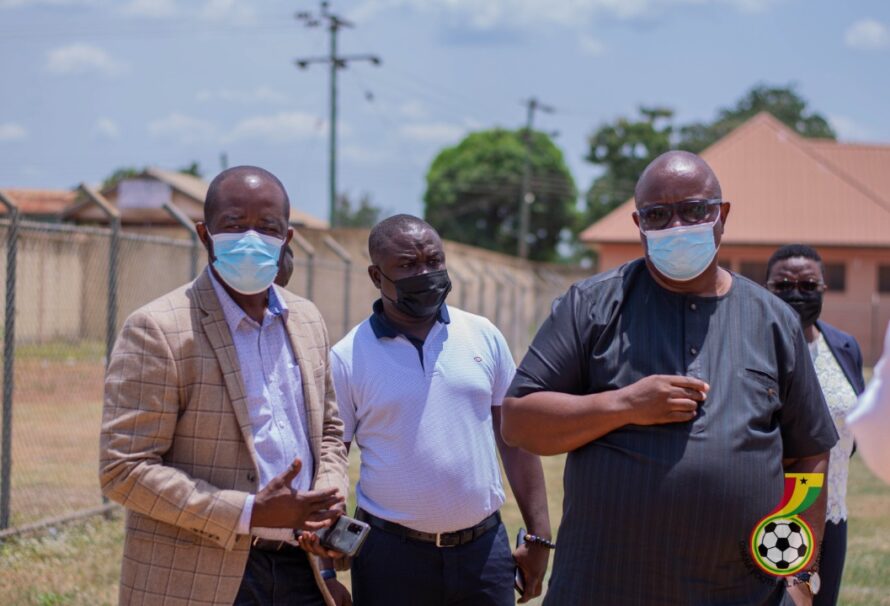 President of the Ghana Football Association Kurt Edwin Simeon Okraku commenced his tour of clubs in the Zone One of the Division One League with an interactive session at Kenyase with Unity FC.

The tour forms part of strategies by the Ghana FA to facilitate the fight against hooliganism in the zone which has led to home bans of some clubs in the league.

Nsoatreman and Mighty Royals are so far serving home bans in the league with pockets of violent and aggressive occurrences at other venues.

The Ghana FA President believes the fight against hooliganism has little or no chance of succeeding if club executives and fans are left out.

Commencing his tour at Kenyase with leadership and fans of Unity FC, Kurt Okraku addressed the gathering, highlighting on some key areas.

Below are some of the key highlights of the address by the Ghana FA President during the meeting with Unity FC:

√ Applauded the leadership of the club for keeping the club active to offer a future for the growing youth and also as a source of entertainment for the community.

√ He also touched on the role of football serving as a tool for unity, emphasising on the recent unites front between Kenyase No.1 and Kenyase No.2.

√ Urged the leadership of the club and the fans around to accept the principles of football and work with it, insisting on the protection of lives and property.

√ Urged the fans and the leadership of the club to use the appropriate mechanisms in channeling their grievances even if they suspect foul play in refereeing. By this,he advised that if they have issues with officiating, they must fill the Refereeing Complaint Form to report dubious decisions to the FA.

√ Also, he asked them to stop influencing referee, if they are involved in doing that and discourage those who do that.

√ He encouraged the fans to stop others from causing chaos at the match venue and also give perpetrators out to aid in the fight against hooliganism.

√ He further called on the club to employ appropriate strategies to survive in the league and emphasized that neither himself or none of his ExCo members, is interested in the promotion or demotion of any club, citing the fortunes of Dreams FC as a case stud. “I am the owner of Dreams FC but when my club was not doing well, I went to Serbia to bring a coach to help my team,” he said.

Following the address of the GFA President, the Administrative Manager of Unity FC Bismark Asante and CEO Yusif Yakubu Chibsah noted some key areas that must be addressed.

Some of the key issues raised included, but not limited to the following:

√ Tgere is a general perception amongst clubs in Zone 1 regarding referees from the Upper East, Upper West, Bring Ahafo and the Northern Regions in handling games of clubs from those areas. Hence, they propose that, if possible, referees from these regions must not be allowed to handle matches in that zone.

√ They called on the GFA President to help clubs write and send proposals for sponsorship.

√ Urged that decisions at the Disciplinary Committee must be expedited.

The team then moves to Sunyani to meet the Sunyani-based clubs in the zone to address the same issues.