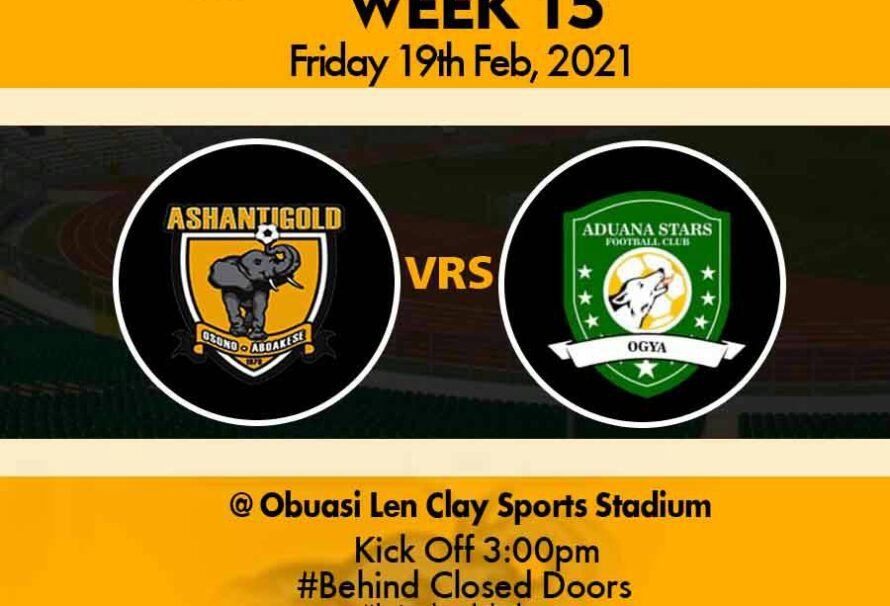 Two former Champions, AshantiGold SC and Aduana Stars lock horns at the Len Clay Stadium, Obuasi on Friday to open the weekend’s round of matches in the Ghana Premier League.

This Match Week 15 encounter presents an opportunity for struggling AshantiGold SC to pull the plug on their recent slump. The Miners are seeking to record a first win in their last 7 league matches.

Since beating Great Olympics away from home last month, the Miners have gone on a 6 game winless streak. Their record of 3 defeats and 3 draws has seen them gradually pace out of the title race with 7 points separating them and league leaders Karela United currently.

AshantiGold will seek to improve their league placing by beating Aduana Stars who lie 6th with 21 points (3 more than Ashgold).

Aduana Stars are having their own struggles although have recorded much better results in the last 5 matches. The 2-time Champions have Coaching issues to sort out as Paa Kwesi Fabin’s contract has expired and it looks likely he will leave the role.

With his availability for the game being highly questionable, Aduana will need to gather themselves and bounce back from their heavy defeat to a rejuvenated Dreams FC side during the last match week.

The match will be showed live on TV, via StarTimes Channel 247 with kickoff slated for 3pm GMT.

AshantiGold have failed to register a single goal in their last 3 home games. They played goalless draws against Medeama and Asante Kotoko while losing 1 nil to Liberty Professionals

After seeing more than 3 goals in their first 4 home games, AshantiGold’s last 3 home games have produced fewer than 2 goals.

Aduana Stars have one win, one draw and one defeat in their last 3 away games

Their last win away to AshantiGold was in 2012. Since then, they have managed just one point from their last five visits to Obuasi.

In 11 home matches against Aduana Stars, Ashgold have lost just once winning 6 and drawing the other 4.

The Miners edge the head to head meetings with 7 wins and 6 Defeats in 20 matches played against the Ogya Lads.