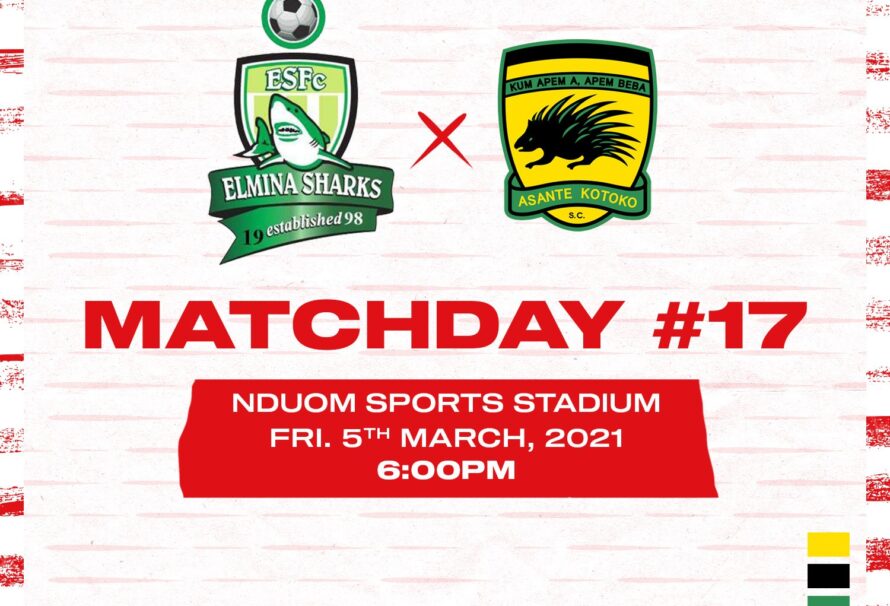 Elmina Sharks have a daunting task ahead when they host Asante Kotoko in a Ghana Premier League Match Week 17 fixture in Friday.

Sharks will host the Porcupine Warriors at the Nduom Sports Complex with kick-off fixed at 6pm GMT.

The home side go into the encounter badly needing some respite after a recent poor run has seen their season’s ambitions evaporating.

They are without a win in their last 6 league games picking an unaopreciable 3 points from the last 18.

Their overall record in last 6 game stands at 3 draws and 3 defeats. What makes this more glum and perturbing is that they have lost their last 3 games in Ghana’s top flight scoring just one goal.

Their situation at home is no different with Elmina Sharks failing to win any of their last 3 matches at the Nduom Sports Complex.

To help pull the plugs in their recent poor form, the club’s management took a decision to dissolve the previous technical team under the leadership of Yaw Acheampong.

Subsequently they have gone ahead to name former Ghana international Nii Odartey Lamptey to take charge of the club’s technical affairs.

His only previous stint with a Premier League team came with Sekondi Hasaacas when he deputised Charles Akonnor.

Hopefully he will be able to rescue a sinking Sharks but against Asante Kotoko they face perhaps their toughest test yet at home. The Porcupine Warriors are the league’s bets away side.

Boasting an unbeaten away record, Kotoko’s run on the road stands at 3 wins and 4 draws; scoring 7 goals and conceding just 3.

Their clean sheet record on the road is equally more impressive. They have kept 4 clean sheets overall, including their last 3 away matches.

How solid their defence is will be tested by an Elmina Sharks side desperate for goals and a win.

The Match will be shown on TV via Startimes Adepa Channel 247.

Asante Kotoko have kept 3 clean sheets in their last 3 away games.

The Porcupine Warriors are currently on a 4 game unbeaten run since losing to Aduana Stars at home.

They are yet to concede a goal in their last 4 games.

Goalkeeper Razak Abalora is currently on a run of 375 minutes without conceding a goal in Ghana’s top flight.