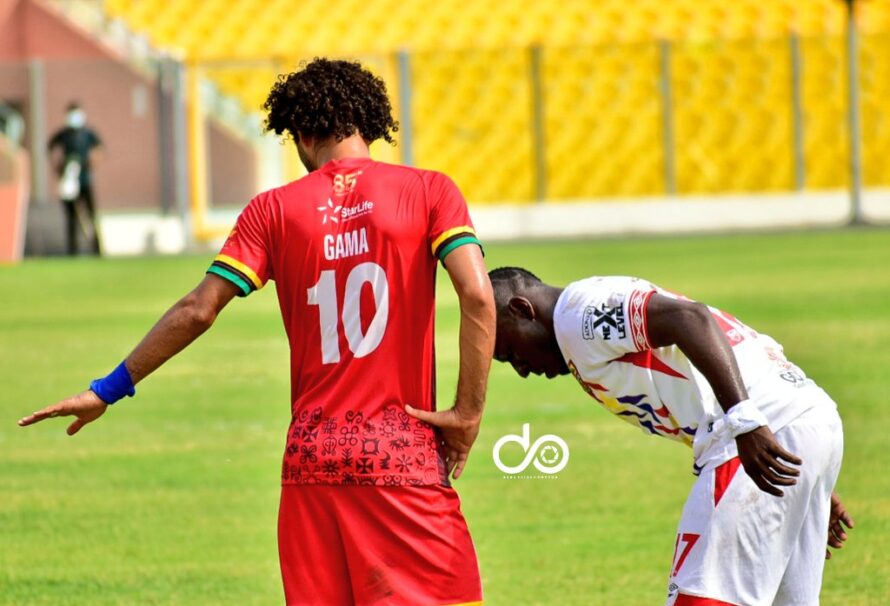 Asante Kotoko and Accra Hearts of Oak played out an entertaining goalless draw at the Accra Sports Stadium in this season’s first installment of Ghana’s Super Clash.

Both teams approached the game in high spirits and derived motivation from the urge to claim 3 points, the bragging rights and more in the encounter.

Kotoko started the game well and they were awarded a penalty. Hearts defender Nuru Sulley downed Kwame Opoku in the box and the referee whistled for a penalty.

However, the Kotoko striker will have his spot kick saved by Hearts Goalie Richard Attah.

Hearts will respond and should have scored I side the 7th minute. Kwadwo Obeng Junior let in Patrick Razak with a pass only for the latter’s shot to kiss the woodwork.

There was another opportunity for the Phobians later on but this time around Kotoko Goalie Razak Abalora denied Obeng Junior with his feet after the Hearts striker attempted to dribble past him.

Opportunities dried up for both sides despite they not taking their foot off the pedal.

Inside 40 minutes, Patrick Razak had an opportunity to score but the attacker shot straight into the arms of goalkeeper Abalora.

After no clear cut chances were created subsequently, the first half climaxed to a goalless stalemate.

Back from the break, Hearts continued their push for a goal and created some openings. However they failed to make it count.

Sensing his team needed a refresh in the middles Kotoko Coach Abdulai Gazale brought on Kwame Adom Frimpong for Emmanuel Sarkodie after 59 minutes of play.

Few minutes later, Kotoko made a change to increase their numbers in the middle. Striker Naby Keita was withdrawn for midfielder Mudasiru Salifu.

Hearts of Oak also responded with a change with Michelle Sarpong coming on for Victor Aidoo.

In the 70th minute, Hearts of Oak were also awarded a penalty after goalkeeper Razak Abalora brought down second half substitute Isaac Mensah following a teasing ball by Fatawu Mohammed.

Mensah stepped up to take it but his effort was however thwarted by a determined Razak Abalora who pushed the ball away for a corner kick.

The resulting corner kick came to naught as Abalora again came out to claim hold of the ball.

In the 85th minute, Kwame Opoku nearly broke the deadlock. The striker Kwame Poku with a brilliant strike turned Mohammed Alhassan and Nuru Sulley but his strike cannoned off woodwork saving Hearts of Oak’s blushes.

The game’s verve fizzled out gradually as the first installment of the 2020-21 season ended in a goalless stalemate.

The result sees Kotoko stay 7th on the table with 24 points with one game in hand. Hearts of Oak lie 6th with the same number of points as their rivals but with a superior goal difference.