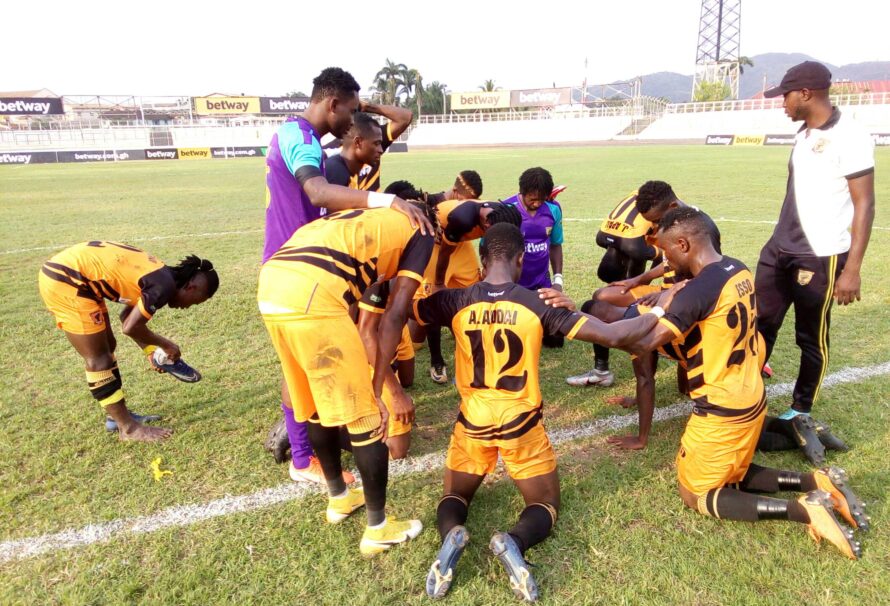 AshantiGold SC ended their 6 match winless run with a convincing defeat of Aduana Stars in a Ghana Premier League Match in Friday.

The Miners hosted the Ogya Lads at the Obuasi Len Clay Stadium for this Match Week 15 fixture.

The Obuasi based side were in wobbly form approaching this game. They had failed to register a single goal in their last 3 home games and played goalless draws against Medeama and Asante Kotoko while losing 1 nil to Liberty Professionals in the process.

However their first half performance against Aduana Stars justified a team eager to end their slump and make progress on the league table.

Frank Akoto converted a 24th minute penalty to give the Miners the lead and they never looked back from there.

5 minutes later, AshantiGold were 2 nil up against a troubled Aduana side.

The first half ended 2-0 advantage the home side and they continued in the second half from where they left off.

The result earns AshantiGold the right to usurp Aduana Stars on the table. The Miners move to 6th on the standings on 21 points (4 points behind league leaders Karela United).

Aduana Stars who have the same number of points slip to 7th.

Other Match Week 15 matches continue on Saturday and Sunday.