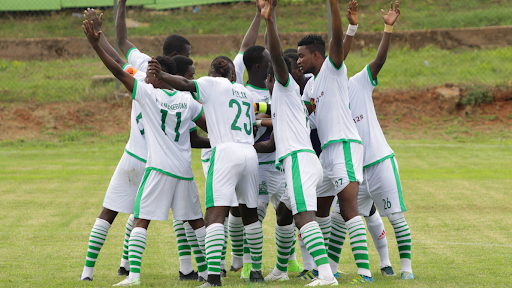 An Alhaji Mustapha strike in the second half was enough to hand Sharks their first win since January and hand Asante Kotoko their first away defeat this season.

Sharks welcomed the Porcupine Warriors to the Nduom Sports Complex on Friday evening. The hosts were a troubled side approaching the game.

They had dissolved their technical team headed by Yaw Acheampong and followed it up with the appointment of Nii Odartey Lamptey as a replacement.

The Fearsome Sharks had also lost out on quality talents like Benjamin Tweneboah, Issaka Mohammed and Benjamin Arthur.

Most pundits expected them to struggle against a Kotoko side brimming with confidence.

The Porcupine Warriors boasted the league’s best defensive record as well as the best away record.

However, that did not threaten the home side who forced the issue to ensure the first half ended in a draw.

Back from the break, the home side got the breakthrough they sought for. Former Ebusua Dwarfs midfielder Alhaji Mustapha broke the deadlock to give his side the lead.

They held on brilliantly to ensure victory to increase their tally to 20 points and lying 13th on the table. Their league position is likely to change depending on results from the other games this weekend.

For Kotoko this marks another disappointing result as they get stuck on 24 points with 2 games in hand.

The Porcupine Warriors have now gone 270 minutes without a goal in all competitions.