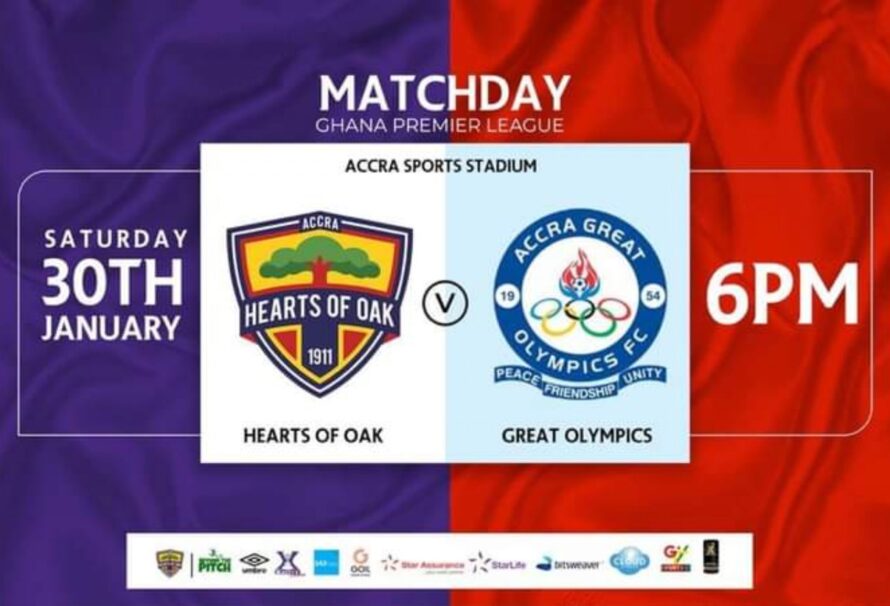 There will be lots at stake when Hearts of Oak host regional rivals Great Olympics on Match week 11 of the ongoing Ghana Premier League season.

The Ga Mashie derby will see both side battle for more than the three points but also for the bragging rights over who lords over the other in the capital.

After a dull start, Hearts of Oak have had a colorful and exciting adventure so far and this is mostly attributable to Serbian trainer Kosta Papic. Since taking over from Edward Nii Odoom, Hearts have been on the rise. The Phobians now lie 2nd on the table with Papic also helping to inspire top notch performances from individuals players like Abdul Manaf Umar, Victor Aidoo, kwadwo Obeng Jr. and others.

Their opponents Great Olympics have enjoyed this campaign too. The Dade Boys look a different side from the one that struggled during the truncated 2019-20 campaign. Credit to Coach Annor Walker who has put together a solid side capable of winning games of this nature.

Sadly, the former Berekum Chelsea Head Coach will not be on the bench due to illness. In his absence, the management of the club have drafted in Yaw Preko with support from former players Godwin Attram and Richard Kingson. They will be hugely motivated to get one over their long standing rivals on Saturday.

The two teams have all to play for as they are separated by just a point. Hearts who lie 2nd have 16 while Great Olympics are not far behind, occupying the 7th position.

A win for either side could have an impact on their league placing at the end of this match week hence anticipate a highly tensed affair. The match will be streamed live on TV via StarTimes Channel 247.

Hearts Last 5 Games: DWDWW
The Phobians are on a resurgence under Kosta Papic. They have won 3 of their last 5 remaining unbeaten during this stretch of games. Remarkably, they have amassed 11 out of 15 available points. They currently hold the tag as the most in-form side in the league.

READ ALSO:  GFA congratulates E.T Mensah and Atikpoe on election as Members of Council of state

Great Olympics Last 5 Games: DWLLD
Great Olympics have won just once in their last 5 games. They have picked a total of 5 points out of an available 15. They are currently 11th on the league log for most in-form teams judging by the last 5 games.

After drawing their first 2 home games, the Phobians have won their last 3 home games scoring not less than 2 goals in each.