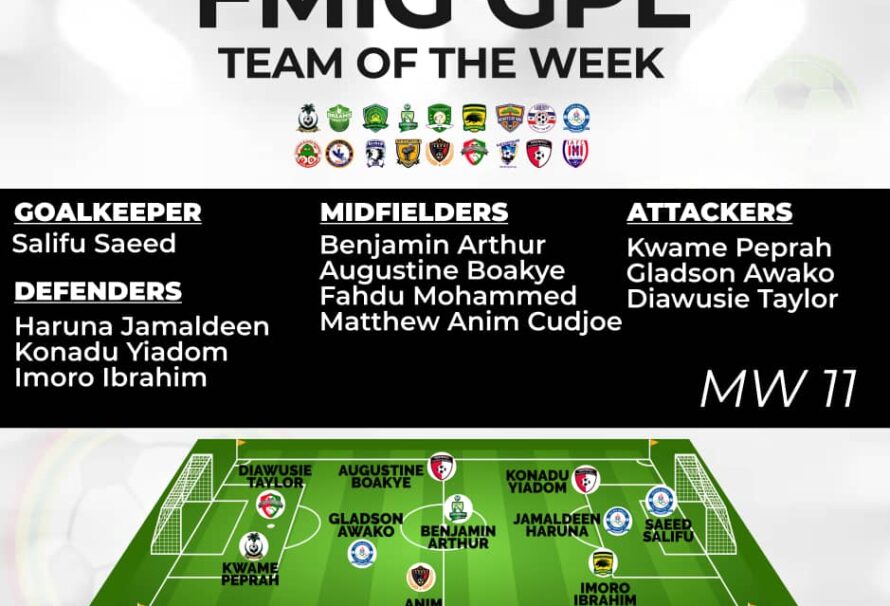 The team at FMIG has put together a team of best performers in the Ghana Premier League during Match Week 11.

From the goalkeeper to the last outfield player, we have taken time to give the various reasons that qualifies the players to make our Team of the Week.

1- Saeed Salifu (GK) (Great Olympics) – The goalkeeper was on top of his game for Great Olympics as they beat Hearts of Oak by 2-0. Produced some marvelous saves to denied Patrick Razak on two occasions. Was adjudged man of the match after the game.

3- Moro Ibrahim (Kotoko) – The left back was phenomenal on the left side for Asante Kotoko combining perfectly with Augestine Okrah to cause problems for the Ashantigold defense.

4- Jamaldeen Haruna ( Great Olympics)- Haruna was solid at the back as Olympics edged Hearts of Oak in the Mantse derby. The young defender dealt very well with the threat posed by Patrick Razak and Victor Aidoo.

5- Konadu Yiadom – (WAFA)- The young defender was impressive at the back as his side walloped Liberty Professional at home.

6- Benjamin Arthur ( Elmina Sharks)- The midfield enforcer return from suspension to produce another impressive performance for Elmina Sharks against Dreams FC. He was named NASCO man of the match after the game.

7- Augestine Boakye (WAFA)- The midfield maestro continued his dazzling performance for the Academy Boys as they thumped Liberty Professional by 5-0. Boakye was voted man of the match following his contributions in side’s overwhelming performance.

8. Fahadu Mohammed – (Dreams)- Scored a belter to help Dreams FC to pick a point at the Ndoum Park. The midfielder justified his inclusion in the team with another improve performance.

11- Matthew Anim Cudjoe (Legon Cities) – The teenager is gradually getting back to his best after scoring the only goal of the game to help Legon Cities to secure their third win of the season.

8- Gladson Awako ( Great Olympics)- Scored a brilliant free Kick to give Olympics a bright start in the game against Hearts of Oak. Awako orchestrated the midfield alongside Micheal Otuo as they Phobians struggled to contain them on the day.

9- Kwame Peprah ( King Faisal)- Bagged a hat trick to inspire King Faisal to an historic comeback against Berekum Chelsea. King Faisal came back from three goals down to secure a 4-3 win at the Ohene Ameyaw Park.

10- Diawusie Taylor (Karela United) – Continued his goalscoring form for the league leaders by scoring the opener again Medeama SC on the day. The goal was his ninth this season in just 11 games played. He was awarded the man of the match on the day.