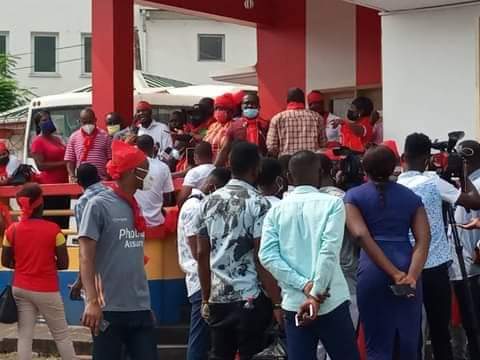 Aggrieved Hearts of Oak fans have stormed the club Secretariat demanding for the immediate appointment of a new Chief Executive Officer amidst the current happenings in the club.

This comes following a mass resignation of the technical team staff within a week raising a lot of concern with the direction of the club.

The fans are protesting on the mismanagement and lack of direction the club has been facing for over a decade and are demanding for an immediate change.

A statement from the National Circle Council read,

Below is the resolution of the Supporters of the club

1. The NCC on behalf of Supporters and other Organs of the club [Hearts Ladies, Ahoopa etc.] is calling for the immediate reconstitution of the Club’s Board of Directors to make accommodation for stakeholders and Minority shareholders and holding of the long overdue Annual General meeting of the Club.

2. The NCC demands an emergency meeting with the majority shareholders for briefs on the current state and happenings in the Club

3. The NCC demands immediate consensus stakeholder meeting between the majority/Minority (Shareholders) on one hand, and other key organs of the Club in order to Foster lasting Unity for the Club.

4. The NCC demands an immediate appointment of a CEO/First Team [Local] Coach and this must be done in consultation with all stakeholders of the Club to energize support base of the Club.

It is our utmost belief that the club can return to its glorious days if these demands are met by the board of directors.

The Chief Executive Officer position has been vacant since the exit of Frederick Moore from the club last year.