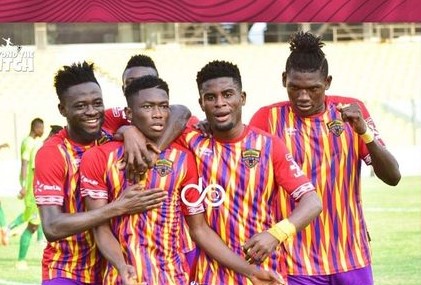 Ghana Premier League club, Accra Hearts of Oak on Saturday, January 2, 2020 recorded a massive win against  the Brong Ahafo’s side, Bechem United at the Accra Sport Station on matchday 7.

The win against the league leaders mark the end to their unbeaten records since the Ghana Premier League began.

It is also mark the fifth time the Bechem side has lost to the Phobians at home.

Pulse.com report the game was fairly balance in the first half with both sides making some dangerous attempts at goal.

However, 39minute into the march, Bechem United’ s Emmanuel Asante was sent off for a second bookable offence for delaying tactics given the Phobia’s an upper hand over their opponent.

The real excite begun in the 53rd minute of the second half when Manaf Umar registered the opener for the legendary club.

Victor Aidoo increase the club’s tally to three (3) in the 68th and 73rd minutes respectively while Frederick Ansah Botchwey recorded the fourth goal in the 85th minutes after which their opponent, Bechem United recorded one.

Hearts’ Nigerien import Souleymane Lawali responded to Bechem’s goal in the 88th minute when he dribbled pas the goalkeeper in a delightful manner and slotted the ball home before, Benjamin Afutu put the icing on the cake  in the 93rd minute bring the tally to 6-1 at the end of the march .