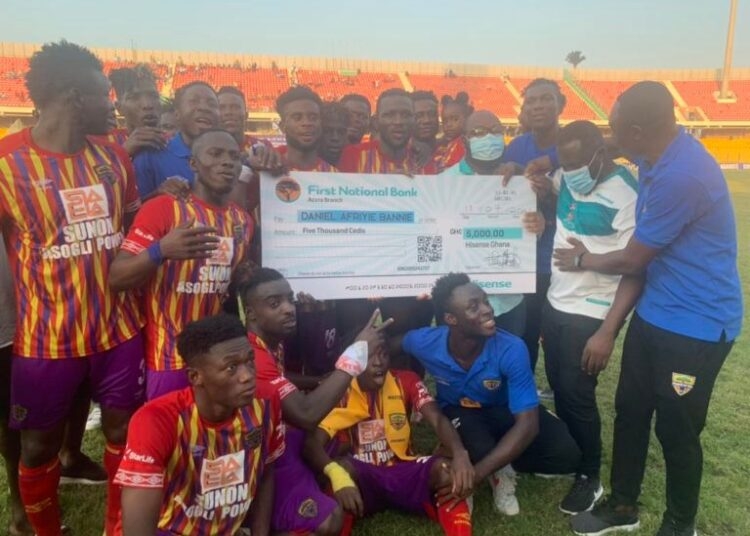 Asante Kotoko partners, Hisense Ghana have presented a cheque of Gh¢5,000.00 to Hearts of Oak young attacker Daniel Afriyie Barnieh for his goal against the Porcupine Warriors in the Ghana Premier League match-week 31.


Asante Kotoko were stunned by a lone goal at the Accra Sports Stadium with the enterprising forward scoring the only goal of the game in the second half.

Hisense prior to the start of the 2020/21 season signed a contractual agreement with Ghanaian giants rewarding opposition players who score against them in Premier League matches.

According to Hisense, the policy of rewarding opposition players who score match-winner against Asante Kotoko is to encourage the Porcupine Warriors to avoid conceding such goals in any match.

Afriyie Barnieh, who led the Black Satellites to win the U-20 African Youth Championship in Mauritania is the latest player to receive such prize from Hisense.

Representative of Hisense made the presentation to the 19-year-old at the Accra Sports Stadium after Hearts of Oak 1-1 draw with Liberty Professionals which aided to lift their 21st Premier League title.

Afriyie Barnieh is a former trialist of Asante Kotoko who was rejected by the club’s former head coach Maxwell Konadu last year.

Meanwhile, Hearts of Oak were declared winners of the 2020/21 Ghana Premier League following Asante Kotoko’s 2-1 defeat to Bechem United on Sunday at the Nana Gyeabour Park.

READ ALSO:  'Playing at Anfield was a proud moment for me' - Majeed Ashimeru rekindles memories of first UCL game

The Phobaians were held 1-1 at the Accra Sports Stadium by Liberty Professionals.