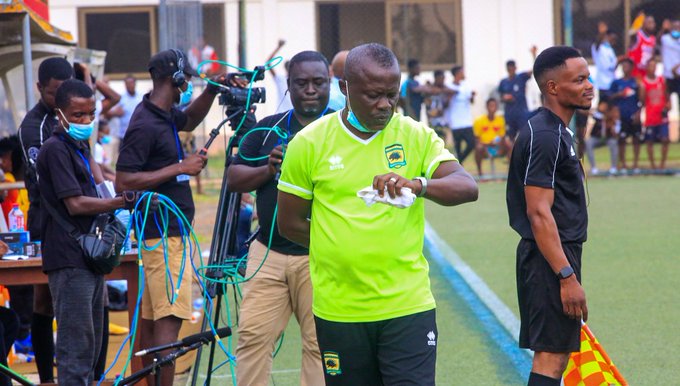 The Porcupine Warriors have not won any of their last 3 matches in all competitions, a streak that Coach Smith is hoping to bring to a halt.

The tactician is confident he can arrest this current run when they face Elmina Sharks on Friday evening in a Ghana Premier League fixture.

In an interview with Asante Kotoko’s Express App, he said, “It is a worry we have not recorded a win in our last 3 games but our away record is perfect so we don’t feel threatened.

“Opponents always prepare very well against us to beat us, but We will definitely get the win and claim all three points,” Johnson Smith concluded.

Ahead of the game Johnson Smith has cautioned his side especially the defence to avoid conceding free kicks around their box in fear of Sharks’ dead ball expert James Bissue.

Smith eulogized the former Sekondi Hasaacas player and warned his player to be wary of the threat he possesses.

“We have to find a way to prevent committing infringements around the box. James Bissue is a very good player when it comes to free kicks and long passes,” he noted.