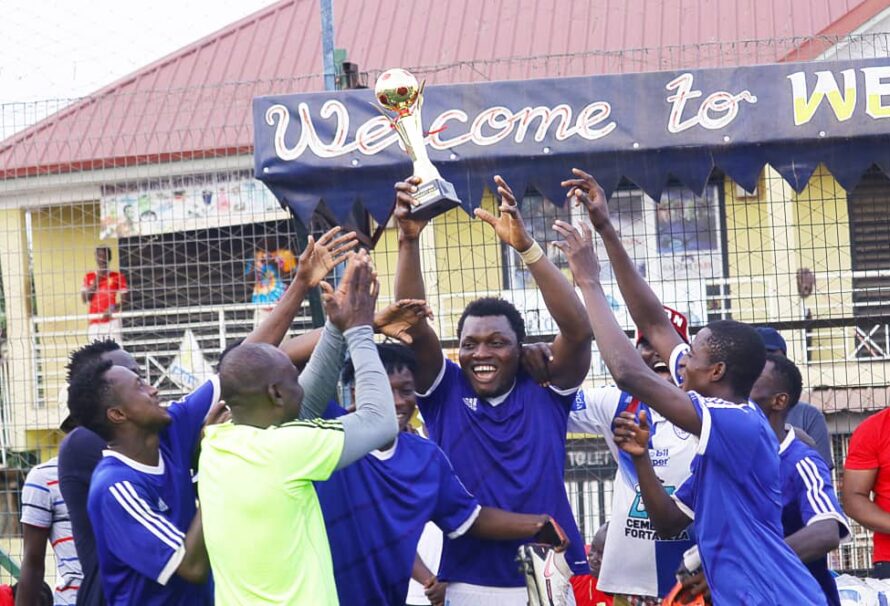 Maamobi Community staged a splendid performance to beat Wembley All Stars in an epic grand finale of the maiden edition of the Ashlid Inter-Community football gala.

The maiden winners kept their nerves from the spot kick after an explosive 2-2 stalemate in regulation time to deny the fearsome Wembley All Stars the trophy at the Kotobabi Wembley Sports Complex.

Eight Communities participated in the mini tournament led by Wembley All Stars, Alajo, Kotobabi, New Town, Maamobi, Pigfarm, Nima and Abelemkpe Community to climax activities leading to the official opening of Ashlid Store in the capital.

The invincible Maamobi Community roared to the final and wasted to time in confirming their dominance at the Kotobabi Wembley Park.

The first half ended 2-1 in favor of Wembley All Stars who paraded a galaxy of stars to participate in the tournament.

The lads from Maamobi fought back after the break to draw level, forcing the game into the lottery of penalty kicks.

They were at the winning siode of the kicks, beating Wembley All Stars by 3-1 from the spot kicks.

The tournament was organized by businessman and the Chief Executive Officer (CEO) of Ashlid Enterprise, Frederick Astu, to open his first Sports Shop in Accra.

For emerging winners, Maamobi Community were awarded with a beautiful trophy, two set of jerseys and three Ashild branded footballs whilst the runners up Wembley All Stars got two bibs and two Ashlid footballs.

Maamobi duo, Daniel Agyekum and Ernest Gyan, won the Best Goalkeeper and Best Player awards respectfully, whilst Elvis of New Town and Desmond Abuga were joint top scorers of the tournament with four (4) goals each.

Ashlid Enterprise is the leading Ghanaian company offering sportswear to athletes in the form of kits, gloves, training bibs, cones, footballs, football boots, and captain’s armbands, among others.

Asante Kotoko SC goalkeeper and 2019 SWAG player of the year Felix Annan and Hearts of Oak Goalkeeper Richard Attah are the Brand Ambassadors for Ashild Enterprise.

In the past, Ashild Enterprise as a company, has been the sole supplier of quality footballs to all the juvenile clubs in the Greater Accra Region.

Adding to their growing portfolio, Ashlid Enterprise is the official headline sponsor of second division side Alajo United Football Club.