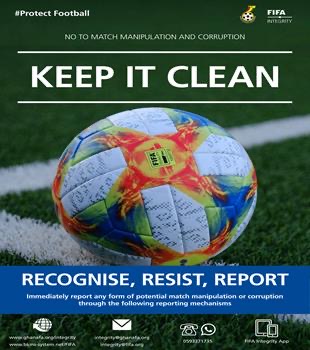 Following the receipt of a Complaint from the Referees of the match between Real Tamale United and Nkoranza Warriors FC today, January 25, 2021, the Compliance & Integrity Officer of the GFA has opened an investigation into the conduct of the Match Commissioner, Ibrahim Fuseini.

The investigation is in relation to a Division One league Zone One Matchday 3 match played between Real Tamale United FC and Nkoranza Warriors FC at the Aliu Mahama Stadium, Tamale.

The Match Commissioner is alleged to have attempted to bribe the referees in order for them not to write an accurate report about the incidents that happened during and after the match.

The Compliance & Integrity Officer of the GFA is working with the GFA Prosecutors and other experts in the investigation.

The Report of the investigation would subsequently be sent to the appropriate judicial body for necessary action.

Meanwhile, the Match Commissioner will not officiate any match until the matter is fully adjudicated in accordance with the Regulations of the Association.

Members of the general public can report any unethical act or behaviour by a club official, match officials or GFA official to the integrity office email – [email protected] or to the hotline – 0593371735