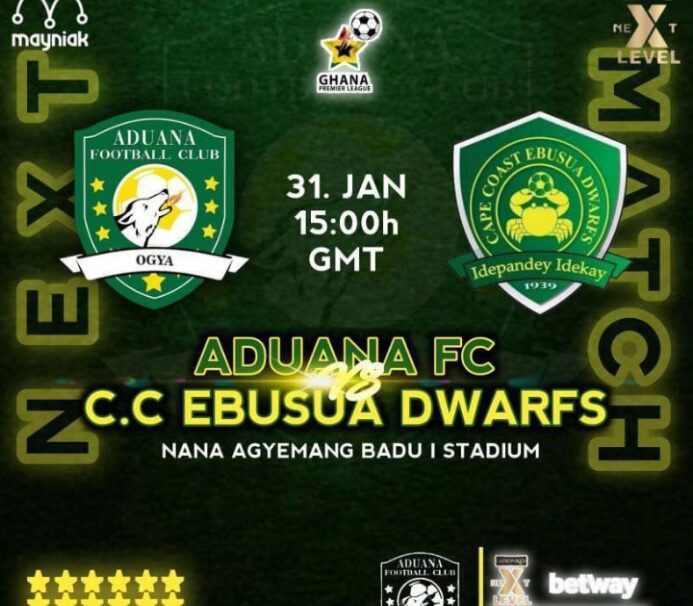 Aduana Stars will be looking to make it three wins in three games when they welcome Ebusua Dwarfs at the Nana Agyemang Badu Park.

The ‘Fire’ club are coming into the game at the back of an historic away win against Kotoko.

Despite their slow start to the season, the Dormaa based club seems to have gotten back to their best following a back to back win against Kotoko and Legon Cities.

A win against Dwarfs could see Aduana Stars jump on the summit of the league.

Ebusua Dwarfs will be looking to return to winning ways after their 1-1 draw against WAFA.

A defeat against Kotoko followed with a draw against WAFA leaves them without a win in their last two games.

Coach Ernest Thompson is under pressure and will take inspiration from his sides good away form in this season’s competition.

Dwarfs have won two of their five games in the road and a victory against Aduana Stars will be a huge statement from the Cape Coast based side.

Fatawu Rahman is available for selection after his injury scare against Hearts of Oak.

Farouk Adams is available for selection after renewing his contract on Monday.

Ebusua Dwarfs have no injury concerns in camp

The Cape Coast lads have won six of the 13 meetings, with three ending in draws.

However, it is worthy of note, Dwarfs recorded their wins at home.

Aduana are unbeaten in Dormaa against Dwarfs.