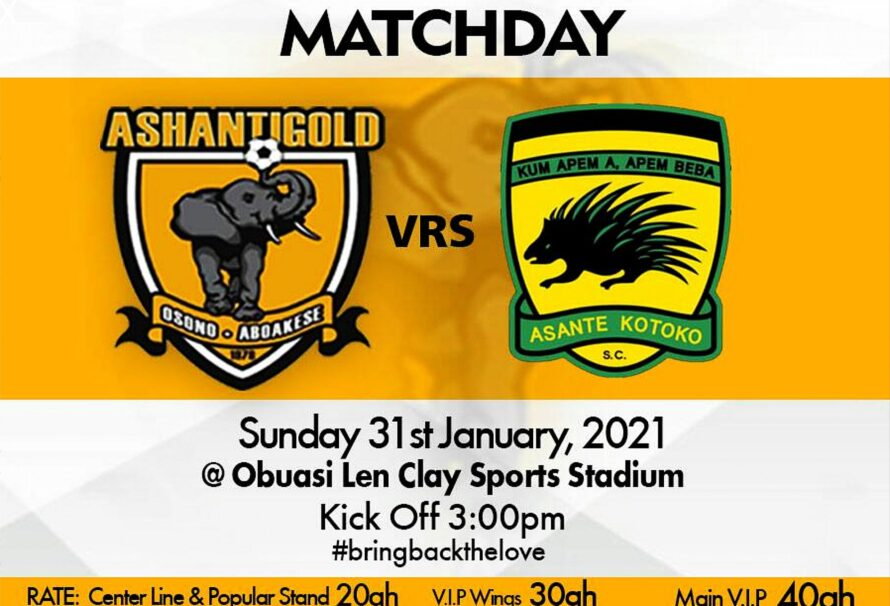 There will be all to play for when AshantiGold SC welcome Asante Kotoko to the Len Clay Stadium at Obuasi on Sunday.

AshantiGold come into the game on the back of a humiliating result recorded against struggling Legon Cities last week. The Miners were pummeled by 5-2 and their situation was worsened due to an injury suffered by star midfielder Appiah McCarthy.

This means the player will miss out on this crunchy tie against regional rivals Asante Kotoko.

Kotoko themselves are nursing their wounds after that painful loss to Aduana Stars during the last match week. A second half strike by Aduana’s Samuel Bioh broke the hearts of the Porcupine Warriors and they will be keen to bounce back by getting the needed result against AshGold.

Coach Johnson Smith has some injuries issues to contend with though ahead of the game. Patrick Asmah who was withdrawn in the Aduana game is unlikely to play a part, but the good news is the return of midfielder Mudasiru Salifu.

Hopefully, his inclusion should give the side an added bite ahead of the game.

AshantiGold have slipped in their last 2 matches, a run that has seen them pick just 1 point from an available 6. This poor form has resulted in The Miners falling behind in the title race.
They now trail table toppers Bechem United by 3 points and need a win to catch up.

The Porcupine Warriors saw their unbeaten run under interim boss Johnson Smith come to an end in last week’s home defeat to Aduana Stars. They will be eager to bounce back and initiate another streak as they chase the teams at the top.
Asante Kotoko are the league best away team. In all their travels they are yet to record a defeat.

AshantiGold SC remain unbeaten in 5 home games played this season. They have only failed to score once in these games.

The Miners have kept just one clean sheet in all matches played this season, coming in their last home game against Medeama.

There have been more than 2 goals in all but 3 of AshGold’s 10 league matches played this season.

At home, they have only failed to score 2 or more goals once.

AshGold have the league second most leaky defence with 16 goals conceded. Their goal conceded per game ratio is only better than that of King Faisal who have allowed 21 goals into their net after 11 games.

Asante Kotoko boast the league’s best away record; winning 2 and drawing 3 of their matches on the road.

The Porcupine Warriors have the league’s best defense too. They have allowed just 6 goals, the fewest any team has conceded at this stage of the season.

Yaw Annor (AshGold):
The enterprising attacker was denied a deserving hattrick in his side’s humbling defeat to Legon Cities. The quick pacy and tricky player bagged a brace in that game to take his tally for the season to 5 goals.

His presence will be key to the Miners’ chances of winning all maximum points.

The young striker is enjoying his debut campaign in the Ghana Premier League. He is Kotoko’s top scorer this season, having netted 5 of the 9 goals his side have registered this season.

The dealy goal poacher is always on the move and a danger for opposition defenders. His movement with and without the ball should trouble AhsGold’s defence line.