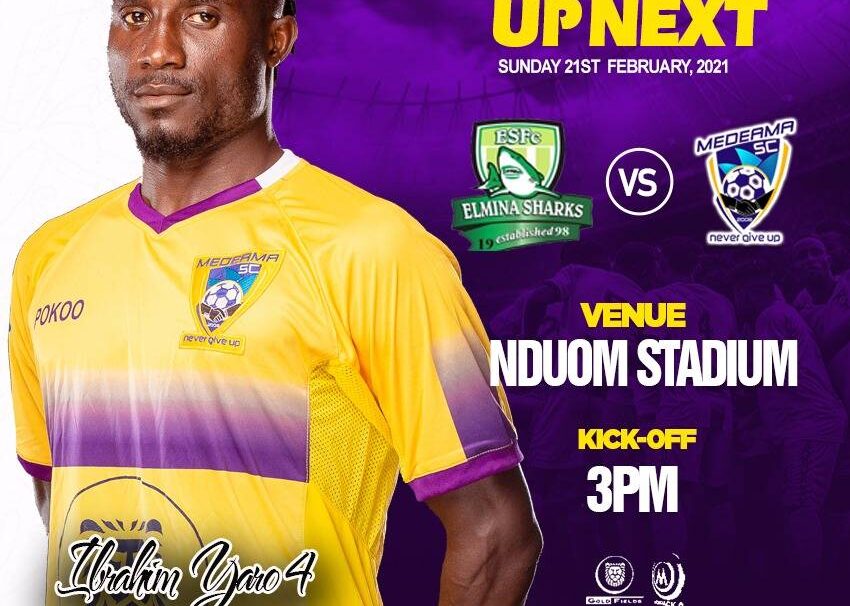 Elmina Sharks will be looking to return to winning ways on Sunday when they host Medeama SC at the Ndoum Park.

The home team are coming to the game after losing 1-0 at Great Olympics in a matchday 14 of the Ghana Premier League.

Sharks despite their inconsistent in this campaign are still unbeaten at home winning three and drawing three in six home games.

Head coach Yaw Acheampong will be hoping his boys come to the party when they the Mauve and Yellow side at home.

They are currently sitting at the 12th position with 17 points having won three games, drawing eight and losing thrice.

Medeama on the other hand will be looking to make it two wins in two games following their victory against Bechem United.

The Tarkwa based side have won only one game on the road in this campaign and will be targeting their second of the campaign.

A win will boost their title chances after a slump in recent weeks.

With the likes of Amed Toure ready to make their debut, the Mauves and Yellow side will fancy their chances on the day.

Burkinabe international Amed Toure is ready to make his debut following the opening of the second window.

The former Asante Kotoko striker has been named in an 18-man squad announced by the gaffer for the trip to Elmina.

Richard Boadu and Kwadwo Asamoah will not be available for Medeama SC.