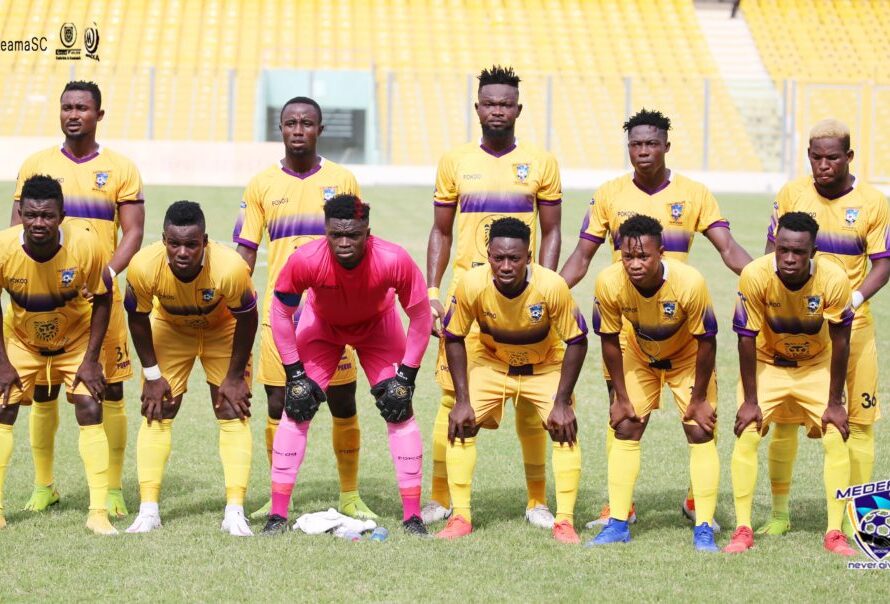 Medeama SC will lock horns with Legon Cities in a crucial home fixture in the Ghana Premier League on Sunday.

The two sides go into the game with different ambitions; title chasing Medeama will need three points to close the gap on the top position occupant, Asante Kotoko who added only a point this weekend. For Legon Cities, its all about escaping relegation in Ghana’s top flight and they will be eager to get something out of this game.

Medeama SC enter this Match Week 20 encounter on the back of a convincing 2-0 win over Dreams FC at home. Unfortunately for the Mauves and Yellow, the hero on the day, Amed Toure will sit out the Legon Cities match due to suspension. Toure has hit the ground running early in his spell with Medeama after joining in the second transfer window. He has 4 goals so far in his first four games and has proven true value for money. His absence will certainly affect Coach Yaw Preko’s plans for the encounter, although the gaffer can fall on the likes of Prince Opoku Agyemang and Abass Mohammed to do a job for him.

Medeama will also be without influential midfielder Rashid Nortey. The dimunitive play maker’s absence will be another huge miss for the technical team, but Medeama’s strength in depth should be enough to cover for his absence. The likes of Benjamin Arthur, Eric Kwakwa, Kwasi Donsu and Agyei Boakye are available to provide cover.

Medeama’s form at the Akoon Park, venue for this afternoon’s encounter has been very impressive off late. Aside remaining unbeaten at home this season, they have also won their last 6 games in the league, amassing all 18 available points.

In Legon Cities, they face an opponent eager to pick at least a point in their games ahead, in their crucial battle for survival. The Royals approach this game on the back of a 2-0 defeat over Great Olympics and that should give them confidence.

The club’s Head Coach, Bashir Hayford is no stranger to Medeama SC and Tarkwa. He handled the side for two seasons between 2010-2012 and also come into the game with a former Medeama Star, Hans Kwoffie.

Kwoffie is in fine form since joining the Royals from AshantiGold SC and his partnership with Victorien Adebayor upfront is set to cause trouble for the home side’s defence.

A win for Medeama SC will see them increase their points to 33. That should fetch them a Top 4 spot depending on how results involving Hearts of Oak and Karela United go.

Legon Cities on 22 points will target adding to their point tally and establishing a gap between themselves and the bottom three.

The game certainly promises more explosive moments and kicks off at 3pm GMT on Sunday.

There have been fewer than 3 goals scored in total in each of Medeama’s last 4 games.

There have been fewer than 3 goals scored in total in each of Medeama’s last 4 home games.

There have been exactly 2 goals in 5 out of 9 Medeama’s Premier League home games this season.

Medeama are unbeaten at home this season. In 9 matches they have won 6 and drawn 3.

After failing to win any of their first three home games, Medeama have turned things around in remarkable fashion. They have won 6 straight home games.

Their overall record on their last five league matches stand at 3 wins, 1 defeat and 1 draw.

Legon Cities have lost back to back away matches in the league and will hope to put this unwanted streak to an end when they face Medeama.

Legon Cities have won just one of their last 5 Premier League away games.

The Royals have scored in all but one of their last 5 away games in the league.

They have won 2, drawn 2 and lost one of their last 5 games in the league.