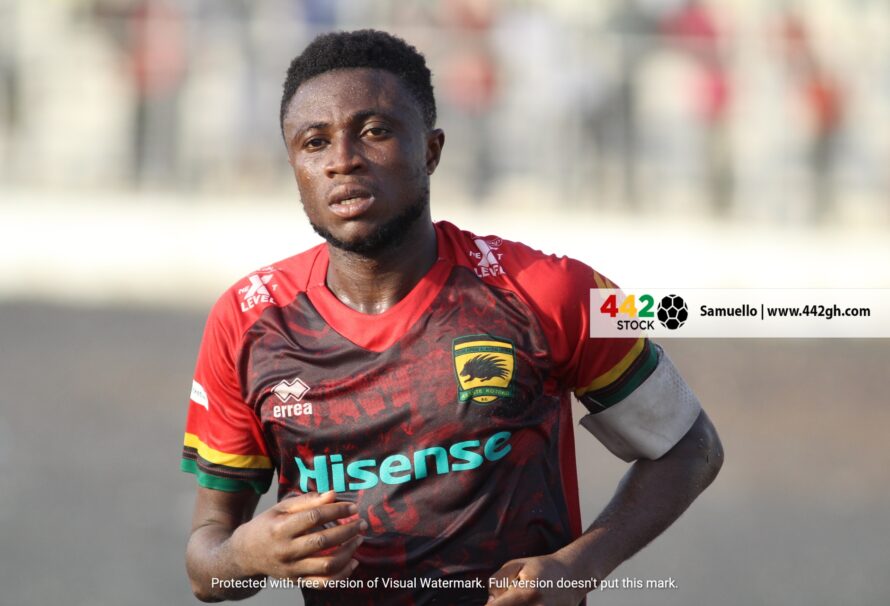 A goal in each half by captain Emmanuel Gyamfi ensured a sweet comeback victory for Asante Kotoko in their pulsating Ghana Premier League fixture against Ebusua Dwarfs.

The league leaders welcomed the Cape Coast based side to the Len Clay Stadium at Obuasi, for this Match Week 24 clash. Kotoko searched the three points to extend their lead on top after close challengers Medeama dropped points earlier on Wednesday.

However they were stunned early on in the game after Dwarfs took the lead from a free kick inside 26 minutes.

After the Kotoko defensive wall failed to react properly from a pass from the free kick area, Skipper Dennis Korsah rifled a shot into the Kotoko net with goalie Razak Abalora having little to do to stop it.

The early goal kicked a then lackluster Kotoko back to life and they charged at the Dwarfs defense in search of a leveler.

The much needed goal came 3 minutes after the visitors had scored. After some nice build up play, Emmanuel Gyamfi evades his marker to head in a cross from the right to beat Dwarfs goalie Razak Issah. Isaah however could have done better than his attempt to keep out the header and let his team down at this stage.

Rattled by the dominance of the away side, Kotoko Coach Mariano Barreto made a tactical change when he subbed off Patrick Asmah for Osman Ibrahim.

That did little to wrestle some control for the home side as Dwarfs bossed the encounter till the end of the first half.

Back from recess, Dwarfs continued where they left off but were once again undone by poor goalkeeping.

After rushing to claim a cross into the box unchallenged, Razak Issah conceded possession to E. Manuel Gyamfi who wasted no time in stabbing the ball into the net to score his second of the day.

This was barely five minutes into the restart and dampened the morale of the Dwarfs players. Try as they did they failed to find a wya past the Kotoko defence who held on to secure yet another win.

The Porcupine Warriors have now won three games on the bounce and consolidate their position atop the GPL standings with 44 points. 4 points now separate them and the teams inside the top 4, though Great Olympics in second have a game in hand.

Dwarfs Coach Ernest Thompson-Quartey who will feel very disappointed in the display of his goalkeeper sees his side occupy the 14th position on 27 points.