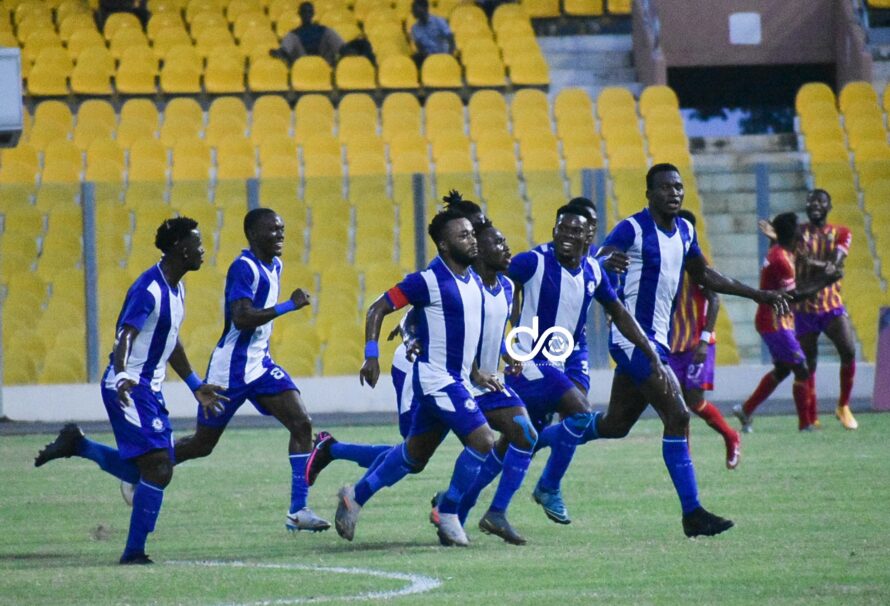 Great Olympics have been proclaimed Lords of Accra following their emphatic victory over rivals Hearts of Oak.

The two clubs clashed in the Ga Mashie Derby on Saturday to battle it out for supremacy over who Lords over the capital.

The game enjoyed the hype and buzz ahead of kick off with fans highly expectant of a blockbuster affair.

They were duly served that when the referee blew his while to initiate proceedings from the start.

Hearts of Oak were the most in-form team of two prior to kick off but soon found themselves trailing their opponents following a moment of brilliance by Olympics talisman, Gladson Awako.

The former TP Mazembe midfielder proved his big game credentials by expertly delivering a free kick into the net inside 14 minutes.

The ball was struck with such precision that Hearts Goalie Richmond Ayi could do nothing about it.

The goal stunned Hearts while it gave the away side much impetus to drive forward.

Hearts did not know what had hit them, and they remained befuddled in a much subdued first half performance.

Back from recess, Great Olympics geared up to protect their lead.

Hearts as expected mounted series of charges on their opponents defense and should have had at least a consolation goal. However they failed to make it count owing to poor finishing as well as brilliant goalkeeping from Olympics stopper Salifu Saeed.

Aside giving them the bragging rights, the win also sees Olympics leapfrog their rivals to move to the 3rd position with 18 points.