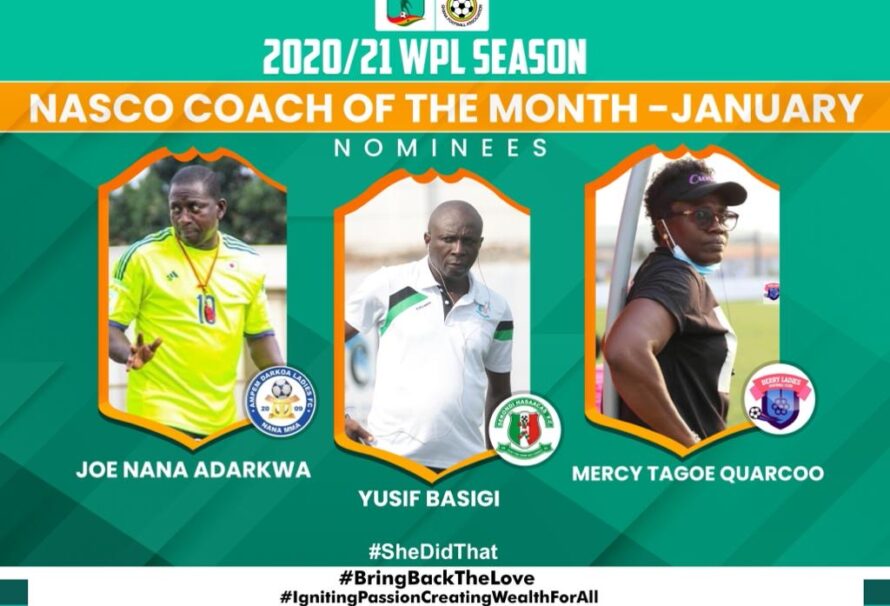 Three outstanding coaches in the Ghana Women’s Premier League, Joe Nana Adarkwa, Yusif Basigi and Mercy Tagoe Quarcoo have been shortlisted for the NASCO Coach of the month award for January.

Joe Nana Adarkwa, head Coach of Ampem Darkoa Ladies has led his side on an undefeated run, recording two wins and a draw in the month of January. His side recorded 4 goals and conceded one, putting his team on top of the Northern Zonal League log with 7points.

Head coach of Berry Ladies, Mercy Tagoe Quarcoo has also been nominated after guiding her side to three straight wins in all three games played in the month of January. Berry Ladies recorded 8 goals and conceded 4goals in the process and are placed first on the Southern Zonal league log with 9points.

Also nominated for the top award for the month of January is the Head Coach of Hasaacas Ladies Yusif Basigi who also led his side in winning two games and recorded a draw as at match day3 in the Southern Zone of the ongoing women’s premier league. The team has conceded just a goal and recorded 3, placing second on the Southern Zonal league log.

A Coach who emerges as coach of the month will be awarded with a NASCO 40inch Digital Satellite TV set. The winner of the award will be announced on Tuesday February 9 on the GFA’s website.