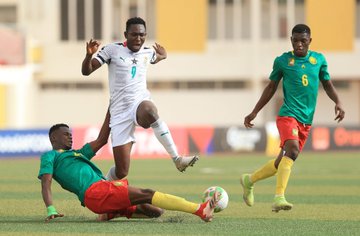 The Black Satellites of Ghana are through to the semifinals of the Africa U-20 Cup of Nations of following a penalty shoutout victory over Cameroon.

Ghana eventually won the game 4-2 on penalties after another impressive display by Danlad Ibrahim.

FootballMadeInGhana.com rated the performance of the Ghana players by 10.

Gk. Ibrahim Danlad (6/10)- Didn’t do much in post as the Cameroonians rarely threatened him. But was always on a alert when he was call upon. Saved two penalties to propel Ghana to victory.

Akoto Philemon( 6/10) – Good defensive display by the right back. Suffered in the early stages but improved as the game went on.

Samuel Abbey-Ashie Quaye (6/10) – Another Solid performance by the left back . Abbey didn’t do much on the attack but was defensively solid. Was full of energy throughout the game.

Frank Assinki (7/10)- What a defensive display by the former Inter Allies defender. Won almost all the battles at the back. Very strong in air and made a lot of clearance to stop the Cameroonians attack.

Uzair Alhassan ( 6/10)- deputizing for Nathaniel Adjei, Uzair didn’t put any wrong foot in the game. Combined very well with Assinki and stop all the Cameroonians assault. Made a statement with his performance.

Patrick MENSAH (6/10) – Good performance from Patrick. Worked very hard for the team as Ghana struggled to match the Cameroonians. Improve performance compare to his first game.

Fatawu Isshaku (5/10) – Average performance from the lad, was outmarked by the Cameroonians. Wasn’t the best of games for the talented youngster. Struggled to influenced the game for Ghana.

Essiam Emmanuel (6/10)- Had to do more of the defensive work due the Cameroonians dominance. Did very well to stop most of their attacks.

Mathew Cudjoe ( 6/10)- Impressive performance from the Legon Cities chap, was Ghana’s most dangerous player in the first half. Made a lot of incursions but couldn’t find the breakthrough.

Daniel Afriyie ( 6/10) – Assisted Ghana’s equalizer with a sublime pass. Wasn’t much involved as Ghana struggled to possessed the game. Not a bad outing from the skipper.

Percious Boah (5 /10) – Not a good day for the Dreams FC chap. Struggled to find himself in the game. Nearly score from a set piece but generally not  a good performance.

Frank Boateng ( 7/10) – Brought energy to the Ghana team and caused a lot of troubles to the Cameroonians defenders. Capped of his performance with a very good goal to drew Ghana level.