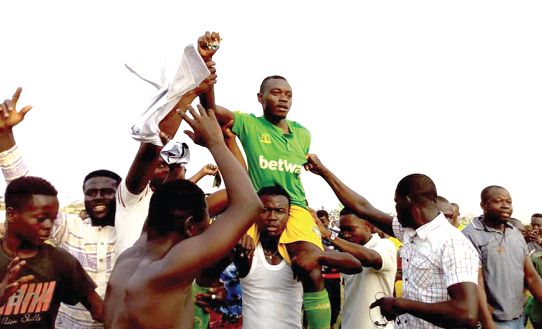 The Porcupine Warriors welcomed the Ogya Lads to the nation’s capital for this crunchy Match Week 10 fixture. The game offered an opportunity for the home side to climb atop the league standings while for the visitors, it was a chance to close the gap on the top teams.

The game got underway with Asante Kotoko bossing the early exchanges but it was Aduana Stars who registered the game’s first clear chance at goal.

Aduana Stars striker Yahaya Mohammed released a shot in the 6th minute which was equally dealt with by Kotoko goalie Raak Abalora.

Kotoko’s playing rhythm gathered more momentum with Fabio Gama being heavily involved. The Brazilian’s trickery drew many fouls but it was teammate Patrick Asmah who proved the game’s first casualty.

Asmah, who complained of an injury was replaced as early as the 13th minute with his place taken by Emmanuel Gyamfi. Gyamfi’s introduction added much energy and pace to the flanks with Kotoko threatening the Aduana defense mostly.

Despite creating decent chances, the first half ended barren.

Back from the break, Kotoko’s Brazilian playmaker Fabio Gama had a clear sight at goal inside the box. However, the left footed dazzler could not find the needed precision as he shot inches over the bar with Aduana goalie Joseph Addo looking beaten.

Another opportunity fell for second-half substitute Naby Keita following a solo drive. Keita with trickery created space for himself and unleashed a shot at goal. The ball looked to be going off target but goalkeeper Addo took no chances as he pushed it behind for a corner.

The game’s defining moment eventually came when Samuel Bioh pounced on a clearance inside the Kotoko 18 yard box and unleashed a powerful right-footed volley into the net within 75 minutes. The ball was struck with such accuracy and power that goalkeeper Razak Abalora could do nothing about it.

With the noses in-front, Aduana held on to the win with solid game management tactics to claim the maximum points. This was the second consecutive time Samuel Bioh had netted the winner against Kotoko and certainly, the Porcupine Warriors looked crushed when the referee’s whistle sounded for the final time on Sunday evening.

The result sees Kotoko miss out on a climb to the top of the standings and equally drop out of the top 4. Victors Aduana Stars move ahead of Kotoko in 4th despite having the same number of points, 16.

Kotoko will want to nurse their wounds quickly with their next game coming at Obuasi against regional rivals AshantiGold SC. For Aduana, their next game is a home clash against Ebusua Dwarfs.