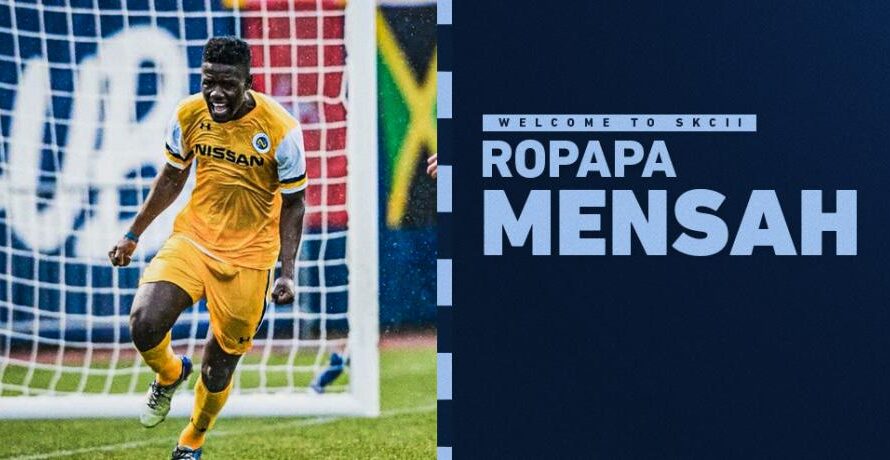 Mensah who join the club from Pittsburgh Riverhounds will officially be added to the Sporting II roster pending league and federation approval, the club has announced.

MENSAH has spent the last four years in the USL Championship, representing Penn FC (2017), Nashville SC (2018-2019) and the Pittsburgh Riverhounds (2020). In total, Mensah has played 103 games, including 61 starts, tallying 26 goals and 14 assists in all competitions for USL Championship teams.

The Accra, Ghana native started his professional career in his home country with Inter Allies, scoring three goals in 19 appearances before heading to Penn FC on loan for the 2017 season. Mensah enjoyed the best scoring season of his career in Pennsylvania, leading the team with seven goals and two assists as Penn FC finished 11th in the Eastern Conference with a 10-15-7 record.

Forming a formidable partnership with former Sporting II midfielder Lebo Moloto, Mensah had five goals and five assists in league play, while adding a goal and an assist in the Lamar Hunt U.S. Open Cup – with his goal coming against MLS outfit the Colorado Rapids in a 2-0 Fourth Round victory. Mensah helped Nashville go a respectable 12-9-13 in their first-ever USL Championship campaign, finishing in the eighth and final playoff spot in the Eastern Conference.

Following the conclusion of the 2018 season, Nashville SC opted to purchase Mensah from Inter Allies, making his loan move permanent. Mensah enjoyed another solid campaign in 2019 – Nashville’s final season in the USL Championship before joining MLS in 2020 – tallying seven goals and four assists in all competitions as Nashville went 20-7-7 to finish second in the Eastern Conference and third in the overall standings.

READ ALSO:  "Gyan will be back before the end of the first round" - Bashir Hayford

Mensah returned to Pennsylvania to join the Pittsburgh Riverhounds for the 2020 campaign, starting 14 of 17 appearances in the truncated season and scoring six goals to go along with a pair of assists. Mensah helped the Riverhounds go 11-4-1 and finish second in their group, advancing to the USL Championship Playoffs.

On the international stage, Mensah was called up to the Ghana Under-23 National Team for the 2019 Africa U-23 Cup of Nations where Ghana finished fourth after falling agonizingly on penalties in both the semifinal to the Ivory Coast and in the third-place match to South Africa.