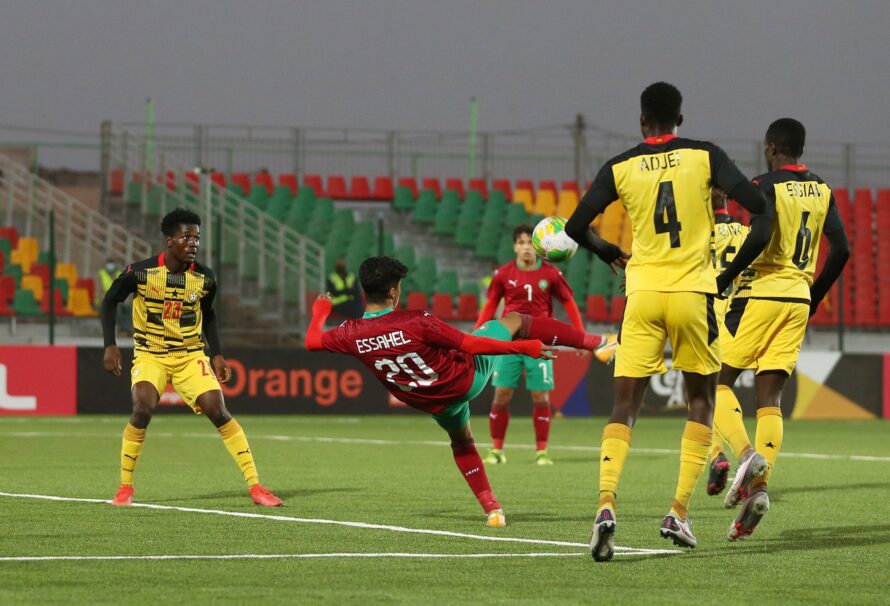 The Black Satellites were held to a scoreless stalemate against Morroco in their second group C fixture in the U20 AFCON in Mauritania.

Ghana had to settle for a draw following a sprinted performance from their North African counterpart.

FootballMadeInGhana.com rated the performance of the Satellite players by 10.

Danlad Ibrahim (C) (7/10)- Good game from the goalkeeper. Forced to make 2/3 saves in the first half as the Morrocans pushed for the opener.

Philemon Baffour (5/10)- The Morrocans gave him a good run for his money on the day. But Baffour did well to defend very well. Couldn’t go forward due to the dominance of the Morrocans.

Samuel Abbey Achie-Quaye (5/10)- Solid display by the Great Olympics defender. He shielded the lateral defense very well. Due to his good work at the left back, the Moroccans stop using his side after about 10 mins in the first half when they tried and couldn’t succeed.

Nathaniel Adjei ( 5/10)- Not a bad performance from the center back but a bit shaky at times. But some good blocks to denied the Morrocans from testing Danlad Ibrahim.

Abdul Fatawu Issahaku (5/10)- Wasn’t at his best on the day. Misplaced a lot of passes in the center of the pitch as he struggled to deal with the Morrocans press.

Emmanuel Essiam (6/10)-
The holding midfielder was NOT at his best tonight. He couldn’t hold up the space between the defense and the defensive midfield position thereby making the Moroccans penetrating to the half of the Satellites always. In the second half, he added his strength to the defense which made the defense a combative one

Mohammed Sulemana (5/10)-
The Left Winger in numerous occasions failed to complete take ons. Also couldn’t make crosses tonight because he always finds it difficult move pass his opponent. Except for few occasions, he comes back to help his lateral defender.

Patrick Mensah (4/10)- Got the nod ahead of Ansu Appiah, failed to make any impact in the game. Was substituted for Mathew Anim Cudjoe.

Precious Boah (5/10)-
Boah was virtually dormant tonight. Had to move to the left to get himself involved in the game. The few ones which came to him too, he couldn’t materialize them. Struggled to breakdown the Morrocans defense.

Joselpho Barnes (6/10)- Didn’t do much in the game as Ghana failed to create goalscoring chance. Wasn’t getting the needed supply and left with no option than to draw back to get the balls.

Methew Anim Cudjoe (4/10)
The Left Winger came to replace Patrick Mensah who was struggling on the flanks. Mathew couldn’t attack as expected of him. Committed few blunders and later becomes a tackler than that of an attacker.

Daniel Barnie ( 3/10)
Barnie couldn’t make any significant impact when he replaced Joselpho Barnes. He [Barnie] had few balls due to lack of creativity from the midfield.

Sampson Agyapong (3/10)
Agyapong couldn’t create a chance for the strikers. He relatively add up to the numbers but virtually had NO impact in the game.