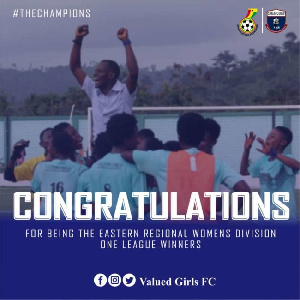 Valued Girls Football Club have set their sights on securing qualification to the elite division of Women’s football in the country.

The fast-rising girls club headed by coach Paul Amponsah Freeman emerged as winners in the just-ended Eastern Regional Women’s Division One League which was organized from 8th August to 11th September 2021 at the Kibi Astro Turf.

However, Valued Girls FC will represent the Region in the middle league which would be held at Madina Astro Turf next week having won the Division One League.

In an interview with Koforidua-based Bryt FM, coach Freeman expressed optimism about the side securing promotion to the Women’s Premier League.

“We will qualify, as I speak, the team is in camp at Kibi and will go to Accra and qualify. Valued Girls will play Women’s Premier League next season at Kibi”

“For so many years there hasn’t been any Premier League side in the Region so we will do everything possible to qualify and am confident it will happen” he said.

The middle league is salted for September 25 to October 3rd 2021 at the Madina Astro Turf in Accra.