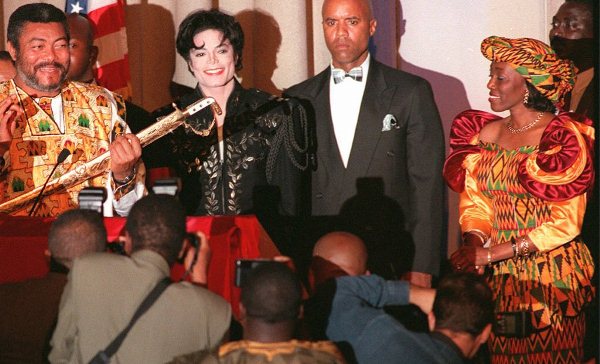 The pictures sighted by GhanaPlus.com had the former president in a hug with the American super Star.

In another, J.J Rawlings had in his hand a sword and was standing beside the Pop King, while his wife Nana Konadu Agyemang Rawlings looked on with a pleasant smile on her face.

The international acclaimed musician was also spotted with an item which, the Ghana Broadcasting Corporation which first shared the post on the Facebook page said was an award presented to the musician by the first family on behalf of the people of the country.

The three were surrounded by a number of photographers busily capturing the memorable event.

The Day in History

The pictures, according to the Ghana Broadcasting Corporation was taken on November 2, 1995, a day in which the international music icon was awarded the “Diamond of Africa” award by then President of Ghana, Flt Lt J.J. Rawlings.

The most awarded artist in the history of popular music received the award at an event held at the Hotel Hilton in Los Angeles, California.

According to the GBC, the internationally acclaimed musician on his part presented two elegantly decorated swords to the Ghanaian first family on behalf of Suadi Arabian Prince, Al-Waleed bin Talal.

READ ALSO:  Afosu-Ampofo must stamp his authority and clamp down on gross indiscipline in NDC