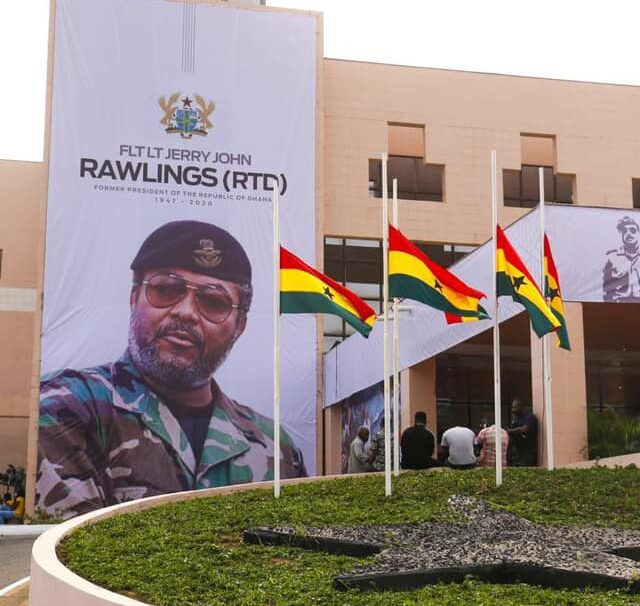 The President of Ghana, Nana Addo Dankwa Akufo Addo and former Presidents , John Agyekum Kufuor and John Dramani Mahama have filed past the mortal remains of the late former Presidents, Flt Ltd Jerry John Rawlings Rtd at the International Conference Center in Accra to pay their last respect to the country’s charismatic leader who passed away last year.

The President and the former Presidents, paid their last respect on Tuesday, January 26, day-three of the final funeral rites outlined for the late Ghana’s longest serving president and founder of  the largest opposition party at the moment, the National Democratic Congress(NDC).

The President, Nana Addo Dankwa Akufo-Addo was in the company of her spouse, the First Lady, Mrs Rebecca Akufo-Addo.

Former President Mahama was also in the company of his wife, Lordina Mahama.

The Vice President, Dr Mahamadu Bawumia and his spouse, Samira Bawumia has also paid their last respect to the late J.J Rawlings affectionately called by Ghanaians as Papa J.

Again, all the Two Hundred and Seventy Five (275) Members of Parliament and staffs of Parliament have also paid their final respect to the first President under the fourth Republic.

He died at the Korle-Bu Teaching Hospital where he was receiving treatment at age 73.