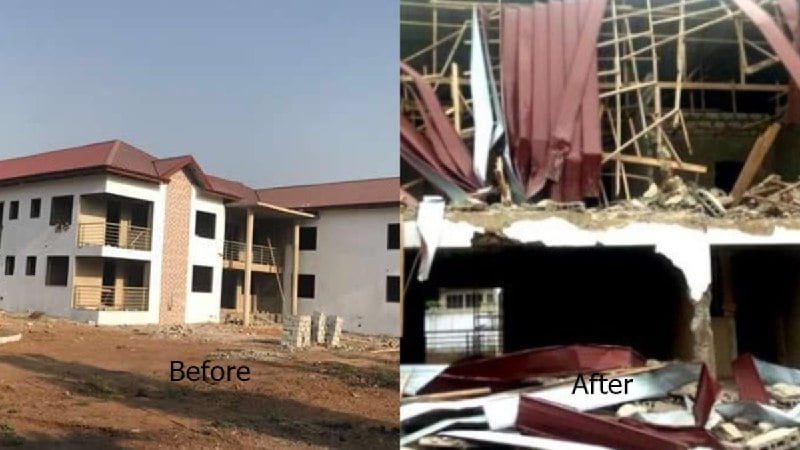 The Osu Stool has claimed responsibility for the demolition exercise at the Nigerian High Commission in Ghana but has, however, added that the said land was not part of the commission’s lands.

A press release signed by the Paramount Chief of the Osu Traditional Area and the President of the Greater Accra Regional House of Chiefs, Nii Okwei Kinka Dowuona VI said, the original building on the parcel of land was demolished and, in its place, a new structure was being erected without authorization from the stool.

The statement also indicated that the said structure, according to their checks were being built by a Nigerian Businessman for entertainment purposes and not a residential apartment for the staff of the commission as being reported in the media earlier.

Invitations to the developer

“The Stool has a high level of respect for foreign missions and has therefore on several occasions verbally informed the unidentified trespasser of the ownership status of the land through the security personnel resident on the parcel of land. The Stool has subsequently sent messages inviting the trespasser for a discussion on the ownership of the land.” the statement said.

READ ALSO:  We are ready for WASSCE Examination, Mfantsipim School

The invitation, the Osu Stool said they were yet to receive any response to it.

Again, the statement indicated that several calls from authorities including officials from the Lands Commission, the Cantonments Police and Police Headquarters to the developer to produce documentation for the parcel of land have proven futile.

“The trespasser has openly and with impunity disrespected the paramount Chief of the Osu Traditional Area, Stool Lands Authority and the Traditional Council of Elders by its attendant behaviour.” The statement added.

The Osu Stool has, therefore, thrown a word of caution to the general public that it still remains owners of the said lands hence persons with interest in the land should first seek its approval.

On Friday, June 19, it was reported that a portion of the Nigerian High Commission’s premises had been destroyed by some unknown armed men.

The matter has created varied reactions among Nigerians in the country causing others to take to the street to protest their displeasure.

The Ministry of Foreign Affairs, however, has begun an investigation into the development.

A Security Expert, Adam Bonaa in an interview with TV3 midday news said the behavior of the Osu Stool is a danger to Ghana’s international relations and called for the arrest of persons involved.