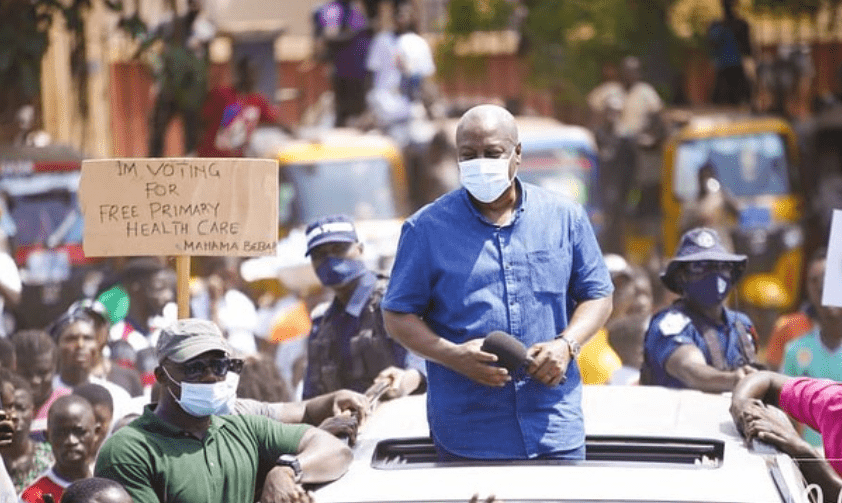 Former President and flag bearer of the National Democratic Congress (NDC) John Dramani Mahama, has advised Ghanaians to vote him into power to allow him to purge Ghana from the high economic conditions it was in.

The country, he claimed, had been suffering under the New Patriotic Party (NPP) as they had placed the country in deep financial crisis and the only way out was through the intervention of the NDC.

The country’s debt stock from independence till date amounts to 230 million, with the NPP contributing a debt of GHc143 billion, what did they do with that amount, he asked.

The former President made the call during a tour within some constituencies in the Greater Accra on Tuesday, as part of the party’s campaign launch for the December 7 elections.

He was accompanied by the NDC campaign manager Professor Joshua Alabi, and other party members and supporters.

READ ALSO:  Jean Mensa did not perform the duties she was supposed to perform– Rojo Mettle - Nunoo

Mr Mahama stated that the NDC in its previous term accrued GHc56 billion which was used to construct the Kwame Nkrumah Interchange, the University of Ghana Medical Centre, the Kasoa Interchange, the Ga-East Hospital, the Tamale Teaching and the Tema and Takoradi Port expansion project, the Atoabo gas processing plant, the Kotoka International Airport, and the Kejetia Market project.

He noted that in light of these project Ghanaians still elected the NPP into power and had now led the country into a dire situation which was detrimental to the growth of the country and its people.

“During the reign of the NPP nothing was fruitful, now is the time for a change in order for all of us to live better,” he added.

Mr Mahama indicated that his next government would construct more markets, open up more digital centres, establish more Technical and Vocational Training Centres (TVET), as well as open up more Senior High Schools to address the double-track system to enable the children to have quality education.

He added that new apprenticeship programmes would be established under qualified masters to bring skills development to the unemployed and for free stimulus packages to be made available to small and medium scale enterprises to promote the socio-economic development of the country.

Mr Mahama assured that Ghana would undergo a transformation which would affect the Pantang hospital as well as the Pantang-Abokobi-Teiman road when elected into office on December 7.