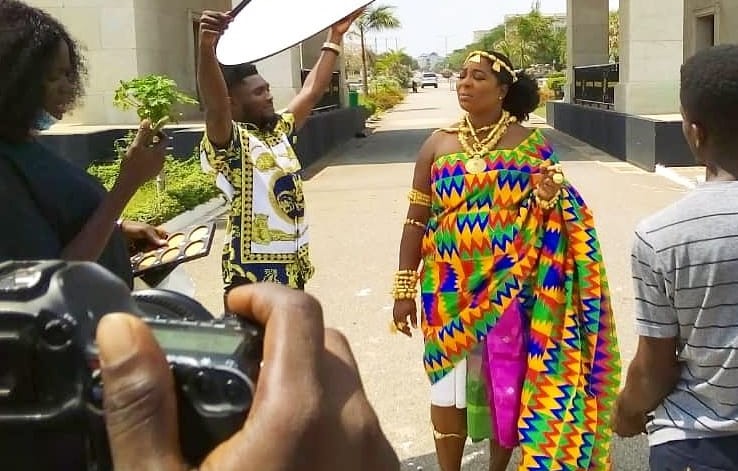 Award-winning Ghanaian actress, Gloria Sarfo has responded to her Instagram follower who told her to get a man and marry.

The actress, a couple of days ago posted pictures in which she was adorned in rich Ghanaian kente with it accompanying regalia’s, a way of dressing which has become familiar with Ghanaian traditional marriage ceremonies.

However, an  IG follower who goes by the Kofib_adu who obviously had mistaken the said pictures taken during a photoshoot section as the actress’s marriage ceremony descended heavily on her asking her to go get a man for herself and marry after realizing the otherwise.

According to the said follower, whose information remains scanty due to the privacy of his IG account, the actress was aging, and that she should stop playing pranks and find a man to marry her and have children of her own.

“@gloriasarfo please stop the rubbish and get yourself a man marry. You’re 40years very soon you will clock 50 years. When I saw this pics I thought you were getting married not knowing is a photo shoot, please, please, get yourself a man and have your children”.

Kofib-adu, believed to be a guy also compared the actress to her colleague and friend Yvonne Nelson who currently, has one child.

“Even Yvonne Nelson who is more classier than you, have a child to boost of. All the same, I wish you all the best,” he added.

Responding to Kofib_adu, the actress said “Who will God prepare a table before, if there are no enemies”.

She indicated that she wish she was as old as the comment said so that people will appreciate and believe in God’s timing.

Together with the comment of her IG follower on her post, this is what actress Gloria Sarfo had to say,

“Oh how I wish I was over 40 years and soon clocking 50🙏🏿, cos by then, hopefully people like you would have known and believed in what is called “God’s timing”, and maybe, just maybe you might be alive to see how GLORIOUS my 40’s and 50’s would be👌💯
My soul is glad, cos anytime I see stuff like these, it only reassures me of the fact that, another GLORY is near🙏🏿🙏🏿🙏🏿
Who will God prepare the table before, if there are no enemies, WHO???
#NeccessaryEvils #ByTheirFruitsWeShallKnowThem

IF ONLY THEY KNEW😄 #ITISWELL🙏🏿
Well, next time READ and UNDERSTAND a CAPTION of any post you see, and SAVE your soul from failing out of NOTHING!!!
MAY GOD FORGIVE YOU AND YOUR ENTIRE GENERATION🙌”