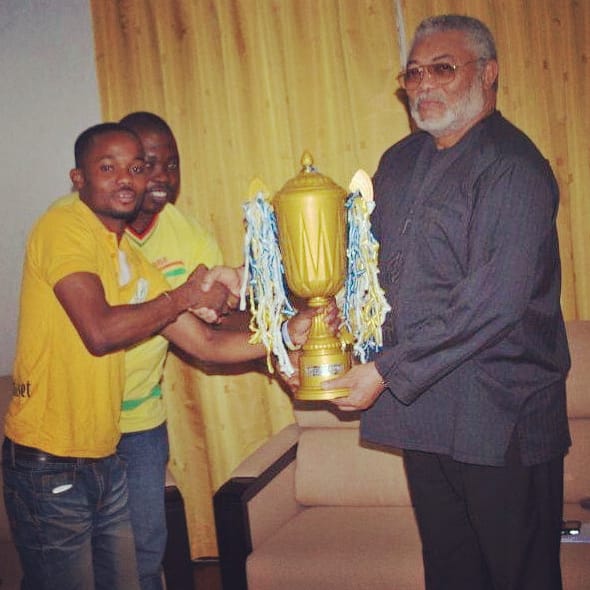 The chairman of the GFA beach soccer Competitions Committee, Yaw Ampofo Ankrah has confirmed that he has received a proposal from the management and board of Keta Sunset Sports for an annual beach soccer tournament in honour of former President Jerry John Rawlings who was an inspiration, a donor and a supporter of the club.

Ampofo Ankrah said more consultations would be made with key stakeholders, specifically the family of President Rawlings before further details are made available.

The late President, first came into contact with the Keta based team in 2013 when they presented their maiden Beach Soccer League trophy to him at his Ridge residence in Accra.

The delegation who made the courtesy call were fascinated by the knowledge Mr President had about beach soccer and his keen interest in the development of the sport in Ghana especially along the volta coastal belt.

The scheduled brief courtesy call turned out to be a deeper engagement with the officials and players that propelled them to promise another title triumph in his honour.

The CEO of Keta Sunset Sports, Ruben Dzidodo Adjahoe, revealed that President Rawlings would occasionally inquire about the team and beach soccer in general.

He will often send words of encouragement to them and follow exploits of the national team the Black Sharks.

Mr Adjahoe revealed how President Rawlings supported Keta Sunset with an undisclosed amount of cash and promised to do more for them if they continued put Keta and the Volta Region on the international map.

“This is one of the motivating factors that lead us to win the Copa Lagos Club Championship in 2019 in Nigeria”.

He added that the late President made them feel relevant and gave the team confidence.

However following the epic win in Nigeria, the presentation of the Championship trophy to President Rawlings was curtailed by the Covid-19 pandemic.

Below is the full tribute by Keta Sunset Sports.

Being your kinsmen and growing up in a community where you were revered, we heard so many astonishing tales about your dedication and fight for humanity.

We were privileged when you recounted a few of those stories when we presented our first ever championship to you.

The sacrifices you made for mother Ghana are an epitome of who you are and the values you held so dearly.

As much as we were overwhelmed by the occasion, mainly because of your immense stature, yet calm nature and attentiveness to each and every member of the delegation.

We were all blown away. You told us to keep doing what we are good at since we were good enough to win the national championship undefeated. Your encouragement and goodwill has spurred us to greater heights.

Mr President, we have not only dominated Ghana but we are proud African Club Champions thanks in part to your charge for us to always go all out.

We only did not we learn to be warriors in the sand for ourselves but we also learnt that we are fighting to win for our family, community and the nation.

Mr. President, the opportunity to present the championship to you in person is the most memorable in the history of the club. Your sense of humor is worth nothing and the fact that you related to home in all our deliberations meant you are and will remain one of us. We learnt very important virtues from that amazing visit .

You influenced our approach to our sports and the results aftermath are evident. Our motto “Heart & Mind” and slogan “Train Hard, Play Hard” are very much in line with the virtues you held dear.

Though you’re gone, our club will continue to honour your memory with our approach to the sports and performance on the sand. We will cherish the time spent with our team and your invaluable advice.

You have paid your dues, May the good Lord grant you eternal rest, Mr. President!