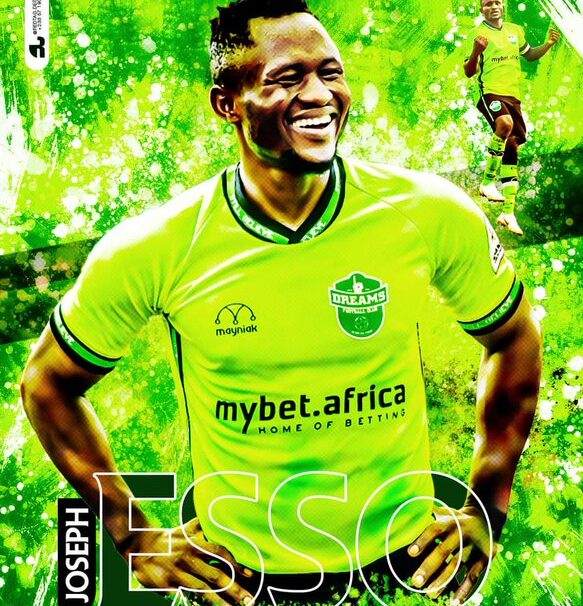 After 16 games in the Ghana Premier League, former Hearts of Oak striker who teared away from the club last season has fired home his tenth goal of the season, silencing his critics.

The goal poacher bagged a hat trick against AshGold at the Theater of Dreams on Thursday in a game the Still Believe lads won 4-1.

The stupendous forward broke the deadlock from the penalty spot at the Theatre of Dreams to give the hosts an early lead.

The former Hearts of Oak hitman scored a quick-fire double less than ten minutes into the second half to grab his hat trick.

Esso’s second goal of the afternoon was recorded in a supersonic style after stylishly knocking home the ball from close range.

The striker took his goal tally to ten after registering the hat trick against AshGold this afternoon.

Esso opened his scoring account in the season by scoring twice against Aduana Stars in a game the home side won 4-2.

The scoring sharpness of the forward was tested at Techiman where he fired the visitors to a wonderful away win over Eleven Wonders. The game ended 2-0 in favour of Dreams FC with Esso scoring one of the two goals.

Dreams needed the scoring instincts of Esso to finish off a wounded Medeama SC at the Theatre of Dreams by 2-1 with Esso scoring the opener for the home side.

In 29 league games for Hearts of Oak in 3 seasons, Esso bagged 6 goals for the capital club but has scored almost a double of that in lesser games for the Dawu-based side.

Many Hearts fans pounced on Esso with various degrees of insults after the striker refused to renew his contract with the club after feeling disrespected by the club’s management.

His move away from the Rainbow Family was felt with a piercing pain by many Hearts fans who never wished him well following his decision to join Dreams FC.

With Esso firing from all cylinders and Hearts of Oak’s top scorer in the season on 6 goals, most Phobias are biting their fingers for letting such a jewel depart.

The season is yet to hit the end of the first round but Esso’s performance promises to impregnated the season with more goals as he aims for the ultimate.