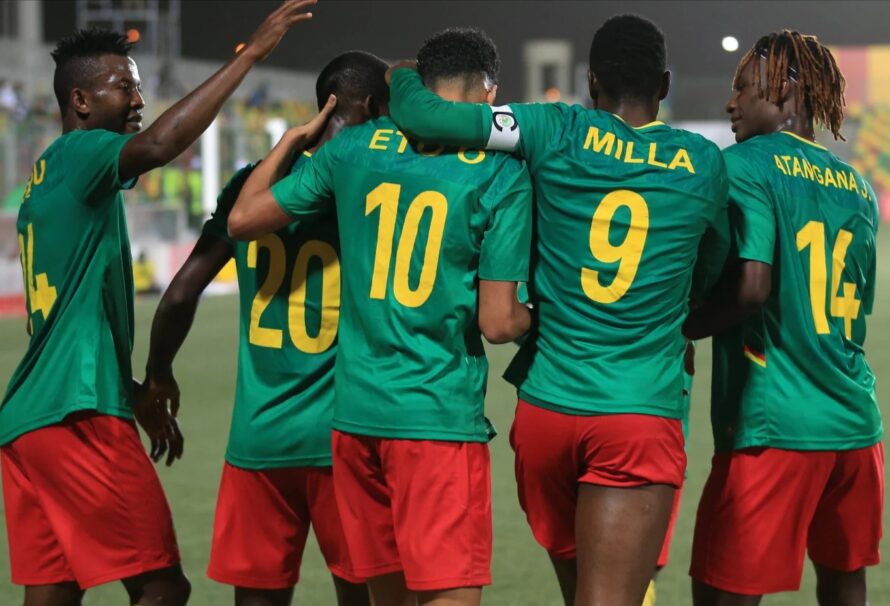 Ghana’s Black Satellites lock horns with their Cameroonian counterpart in the first quarter final of the 2021 CAF U-20 AFCON currently ongoing in Mauritania.

Ghana have suffered from an inconsistent form so far in the competition and only made it to this stage after emerging as one of the best third place teams.

Cameroon on the other hand have been high flying. The Young Indomitable Lions are highly fancied going into today’s game as they remain the only team with a 100% record in the competition.

They made light work of opponents like Uganda, Mauritania and Mozambique scoring the most goals in the tournament as yet and conceding just a goal.

Among those wreaking havoc on opponents for Cameroon are attackers Sunday Jang Junior and Etienne Eto’o (son of the legendary Samuel Eto’o).

Check out the various danger men the Ghanaian team would have to watch out for;

Cameroonian attacker Sunday Jang Junior scored the two goals that earned Cameroon a place in the last eight from the victories against Uganda and Mauritania. He was rested in the final match against Mozambique also due to the fact that he had a knock on his ankle.

He has trained well with the rest of the young Indomitable Lions over the past three days and is once again expected to lead the line of attack against Ghana.

He is the son of former Cameroonian international Sunday Jang.

Etienne Eto’o scored a brace and made one assist in his first start at the competition in Cameroon’s demolition exercise of Mozambique.

The son of Cameroonian legend Samuel Eto’o had only made the bench in their first two games against Uganda and Mauritania.

However, he made a solid case for a spit in the starting line up with his man of the match performance in their last group game against Mozambique.

He has 2 goals and an assist so far in the competition and should give Ghana’s defense problems when he’s involved whether from the start or off the bench.

Midfielder Fidel Bryce Ambina has also been key for Cameroon, providing a good shield to the backline and initiating moves upfront for his side and will also be a key part of the game plan on Thursday, especially as far as limiting Ghana’s midfielders influence of the game.