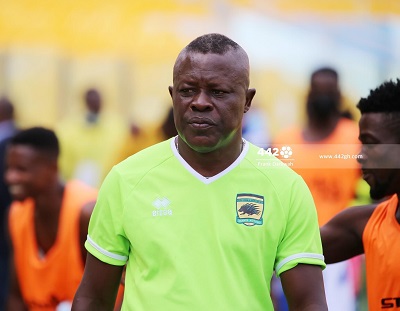 Asante Kotoko Head Coach Johnson Smith has called for fair officiating ahead of his side’s crunch fixture with Elmina Sharks.

The Porcupine Warriors lock horns with the Fearsome Sharks with the latter hosting the former at the Nduom Sports Stadium in Elmina.

Asante Kotoko are have an untainted away record in the league, winning 3 and drawing 4 of 7 games played.

Johnson Smith believes his team is ready to extend their unbeaten away run and is even cocksure of a win should his side get fair officiating.

Referee Benjamin Sefa has been appointed as center referee for the game. He will be assisted by Thomas Ngmindieye and Kofi Andoh-Kyei with Eric Sefa Antwi acting as the 4th official.