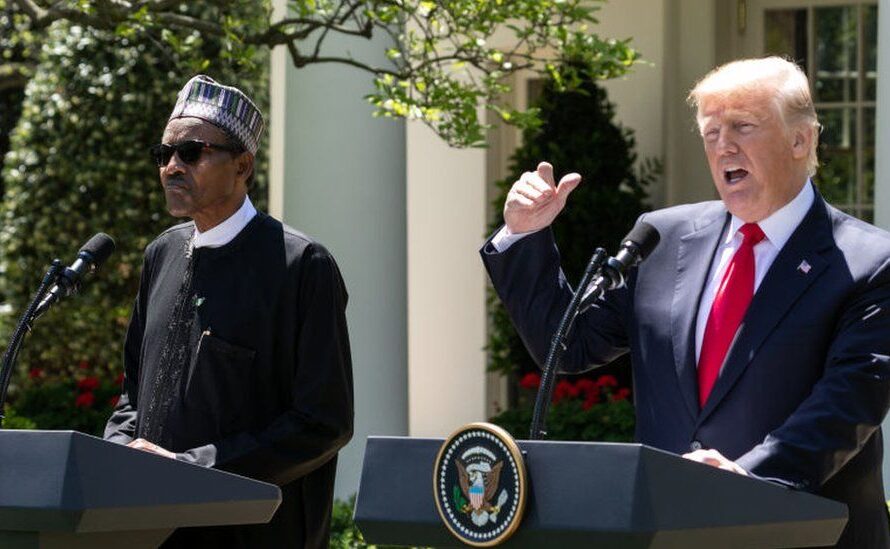 Former US president Donald Trump has praised Nigeria’s government for banning Twitter after it deleted President Muhammadu Buhari’s post for breaching its rules.

“Who are they to dictate good and evil, if they themselves are evil?” Mr Trump said in a statement.

Mr Trump was banned from both platforms after the US Capitol riot in January.

His posts before and after the raid were alleged to have encouraged violence.

What did Trump’s statement say?

“Congratulations to the country of Nigeria, who just banned Twitter because they banned their president,” he said in a statement released on Tuesday.

He suggested that he should have banned Facebook while he was in office, but said the company’s boss Mark Zuckerberg “kept calling me and coming to the White House for dinner telling me how great I was”.

The 45th US president has struggled for attention since his access to Twitter and Facebook was blocked. A website he launched last month to get his word out was closed because of poor traffic.

The authorities in Nigeria accused the platform of threatening the country’s “corporate existence” by allowing “misinformation and fake news to spread.”

The ban followed the removal of President Buhari’s tweet, which referred to Nigeria’s civil war four decades ago, and included a veiled threat towards those backing a secessionist movement in the south-east of the country.

His government said on Saturday the tweet’s removal was “disappointing”, but was not the only reason for Twitter’s “temporary” suspension.

Information Minister Lai Mohammed told the BBC Focus on Africa programme that the platform was being used by Nnamdi Kanu, the leader of separatist group Ipob, to direct attacks against the government in the south-east region.

“This is done consistently and wilfully without consequences,” he said.

The professional body of Nigerian mobile phone operators – known as Alton – said its members had been told to block access to Twitter.

The authorities have since said they will prosecute anyone found to have breached the ban, however they have not yet announced any arrests.

A group of human rights organisations says it has filed a case with a West African regional court against the Twitter ban, saying it contravenes the right to the freedom of expression.

It has also been condemned by some Western countries and the body representing Nigeria’s lawyers.