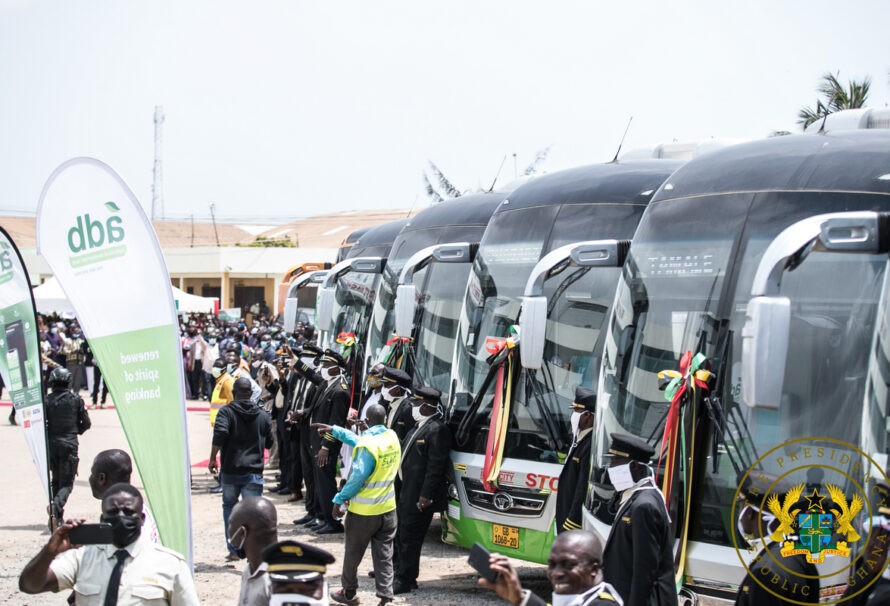 President of Ghana, Akufo-Addo, yesterday in Accra, presented 100 new buses to the Intercity STC Coaches Ltd to allow the business to broaden its services to the far reaches of the country including other West African countries.

The donation was in the form of a US$13 million loan from ADB Bank to which the state-run company would procure the buses on its own balance sheet to be paid back with a three-year repayment period.

Presenting the donation at the companies headquarters in Accra during his tour, he stated that the government would continue to support the company to make it the most successful in the country.

Congratulating the CEO of the company, Nana Akomea, President Akufo-Addo said it was praiseworthy for a state-owned company to stand on its own and contribute to the government rather than to depend on it, adding that, “we should give a round of applause to him and the management”.

“I am happy that after December when the support will end, they will be able to maintain themselves and move forward”.

“Transport is essential to the country and STC is making great strides in contributing to the economic development of the country,” the President added.

He urged the management and staff of STC to continue to avail themselves to their duties and customers.

President Akufo-Addo hoped that the management would adopt accurate maintenance methods to improve their operations.

Nana Akomea on his part commended the government for supporting the company and pledged to perform his duties with utmost humility and determination.

He noted that covid-19 had negatively impacted the transport industry but was hopeful that the company would bounce back and begin to male strides.