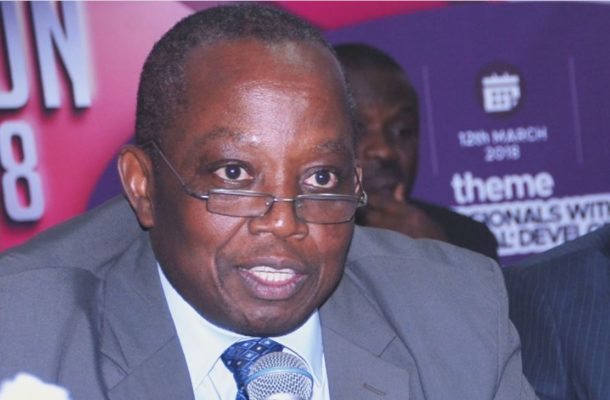 Refund your salaries to the state – Domelevo told

The Member of Parliament(MP) for the Ejisu Constituency, Mr John Kumah has asked the Former Auditor General, Mr Daniel Domelevo to as a matter of principles refund salaries received in the last one year in which he was supposed to be on retirement to the state.

John Kumah, a former Chief Executive Officer of the National Entrepreneurship and Innovation Programme (NEIP) told Onua TV’s Kwame Tutu on the ‘100 Degrees’ programme, Monday March 29 that Mr Domelevo’s own personal information he gave to the Social Security and National Insurance Trust (SSNIT) indicated that he was supposed to have gone on retirement a year ago.

To that end, he alleged that all the salaries received during the period Mr Domelevo stayed in office were received illegally.

“Nobody in this country is after Domelevo, no one is against him. What happened to him is a matter of law,” Mr Kumah said.

He added “We have all seen the forms he filled to SSNIT and clearly, he was supposed to have gone on retirement a year ago.

“Mr Domelevo set a certain standard in this country and he has principles. This is a man who went after people who he believed mismanaged the public purse and so one would have thought that he would do things differently.

“He is also on record to have said that some people fidget or tamper with their dates of birth when they are about to go on retirement to enable them continue to stay in office.

“And so I was surprised when he stayed in office for a year when he was due for retirement. I will ask him to refund the salaries he obtained illegally during the period he was supposed to have gone on retirement.”

A statement signed by Secretary to the President, Nana Asante Bediatuo, said the order to him was on the heels of an indication by the Audit Service Board that Mr Domelevo had exceeded the eligible age to remain in the workforce.

“The attention of the President of the Republic has been drawn to records and documents made available to this Office by the Audit Service, that indicate that your date of birth is 1st June, 1960, and that in accordance with article 199 (1) of the Constitution, your date of retirement as Auditor-General was 1st June, 2020.”

The statement explained that “based on this information, the President is of the view that you have formally left office.”