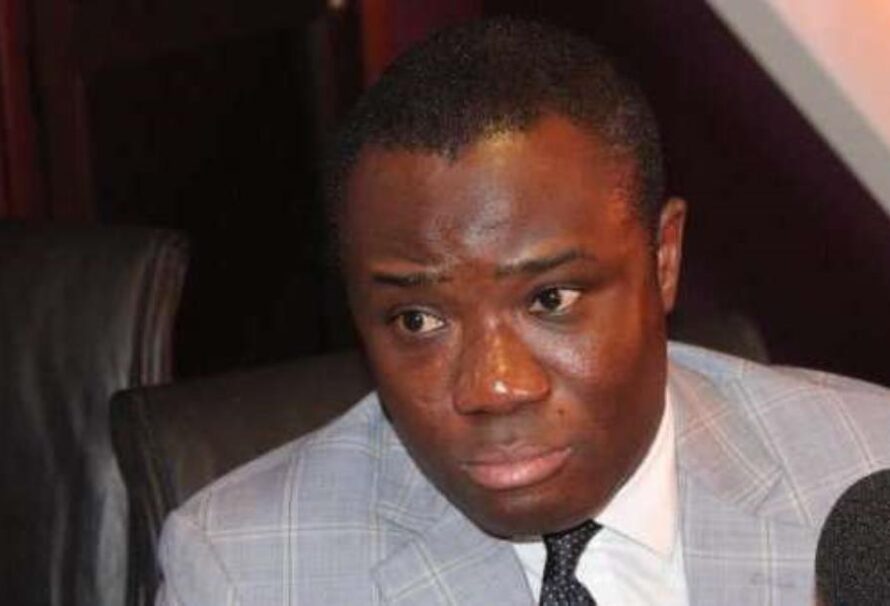 Aspiring Member of Parliament for Abura Asebu Kwamankese and Former Deputy Information Minister in the erstwhile John Mahama administration, Felix Kwakye Ofosu has been caught allegedly having an affair with a woman engaged to be married soon.

Report indicates Mr. Felix Kwakye Ofosu was accosted by the family of the groom-to-be at about 5:00 am early morning on one of his routine sleepovers at the house of his supposed lover in an undisclosed location.

A video circulating in the media and sighted by GhanaPlus.com show the National Democratic Congress (NDC) member in an exchange with the groom-to-be’s family at the time he was accosted.

Two family members of the supposed groom-to-be identified as Ebo and living beyond the shores of the county, a woman and a man, who the conversation revealed have monitored the activities of the two, stormed the lady’s apartment owned by the groom to their utmost surprise.

Mr. Ofosu Kwakye was wearing a black Polo-Shirt with NDC printed on the chest at the time of the incident.


Felix: Maa, Maa, I swear by God in heaven, I have nothing to do with her” Mr. Felix Kwakye Ofosu told the woman identified as the elder sister of the groom to be also identified as Ebo.

Man: Felix, I will record everything single thing, should I call your wife? a brother to the groom to be told the Honourable Minister.

Mr. Ofosu Kwakye responded “my wife is not in the country, do you know my wife?

Man: “Felix if talk to me nicely, we will end it here but if you play it hard, I will be hard”

“So what is the point in all of this?” My Kwakye Ofosu quizzed?.

Man: “My only point is what is an honourable member doing in my brother’s girlfriend room at 5 am, my brother is coming down to marry the same girl. Felix this not the first time am seeing you in this house. I am the cool type you come here, you sleep, you wake up, you go, I don’t mind but it too much, my brother is getting married by that is the painful part of it”.

Part of the conversation as it ensues among them during the cause of the heated argument.

According to the groom’s brother, he was recording for reference and evidence purposes because the Hon. Member of Parliament could not be trusted and might distort the truth.

Mr. Kwakye Ofosu who was obviously not happy with the development asked the two to calm down for dialogue, however, the man’s only condition to give into a conversation, was for the conversation to be recorded.

Mr. Ofosu Kwakye is yet to respond to the video making rounds.

Watch the full video below: