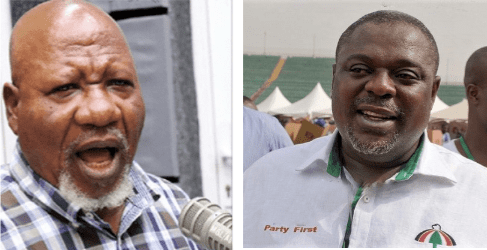 The National Democratic Congress (NDC) has finally heeded to calls from its supporters to institute further action against suspended members, Samuel Koku Anyidoho and Allotey Jacob.

The National Chairman of the party, Samuel Ofosu-Ampofo has said the leadership would look into what could be done with regards to the calls.

“As we speak, they have all been suspended from the party. If you wish that we take further actions against them following their action we will listen. We will go and look at exactly what has to be done to ensure sanity”.

In a radio interview, Mr Ofosu-Ampofo said “What I can tell our supporters are that let us ignore Koku Anyidoho and Allotey Jacobs and focus on our party.

“Only last week a newspaper published with the headline ‘John Mahama you are no longer leader of the NDC, hand over to Ofosu Ampofo to come and redeem the party’ which was attributed to Koku Anyidoho.

READ ALSO:  I didn't mean to insult the sensibilities of well meaning Ghanaians – Asare-Bediako says in an apology over Akufo-Addo freebies comment

The Functional Executive Committee (FEC) of the National Democratic Congress (NDC) suspended Mr Koku Anyidoho who is a former Deputy General Secretary of the NDC and Allotey Jacobs, a former Central Regional Chairman of the party, with immediate effect.

“You are therefore by this letter to take note, and notice is hereby given, that your membership of the NDC is suspended pending the hearing and final determination of the petitions against your conduct,” Mr Asiedu Nketia, who was contested against by Mr Anyidoho at NDC’s last national executive congress, stated in the letter dated Monday, February 8, 2021.

READ ALSO:  Marry more than one because there are no "Correct Women"

Since losing the 2020 elections, Koku Anyidoho has taken to Twitter to make comments that have not gone down well with many members of the party.

Regarding Mr Allotey Jacobs, his letter signed by Mr Ofosu-Ampofo, said he was suspended for “persistent anti-party conduct”.

He has since declared that he no longer belongs to the NDC. To him if the NDC says it has suspended him, he has also “dismissed” himself from the party.